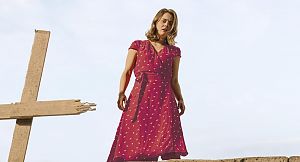 Frank wakes up. He‘s in a portable toilet. The toilet is in a construction pit. Frank has to free himself. Lukas Rinker confidently switches between a highly tense thriller, pitch-black comedy and violent splatter.

Wolfi has invited his best mates to his villa in the south of France for his 50th birthday. They try hard to party like they used too but their macho antics can barely conceal their sense of failure.

Axel Ranisch’s new film ALKI ALKI centers on successful architect Tobias and his best friend Flasche (bottle). They have lots of fun together, but Flasche also seeks to destroy everything Tobias has ever cared for. A German mumblecore comedy.

Mossad agent Naomi is meant to protect Lebanese Hezbollah defector Mona in a secure apartment in Hamburg, but Mona might be a double agent. A complex spy thriller directed by Eran Riklis. 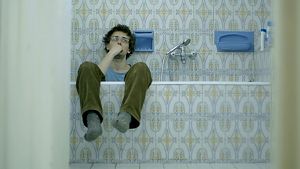 Schlubby Aron just can’t seem to get a break from his friends, his mother, and life in general. 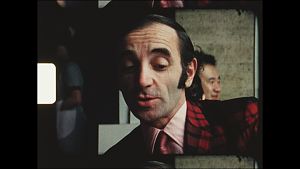 Charles Aznavour has been filming his life ever since Edith Piaf bought him a Baillard Bolex camera in 1948. Director Marc di Domenico has made a film about the actor and chanson singer that is assembled from Aznavour‘s film archive, his ...

BATMAN-Star Michael Keaton plays Riggan Thomson, an ageing actor who used to be a star as the hero of BIRDMAN series. Now, at age 60 he has another go at lasting fame with an adaptation of Raymond Carvers 'What We Talk About When We Talk About Love'. 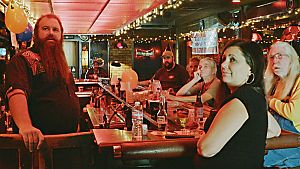 A piece of old school Americana: the last night of a bar, somewhere in the outskirts of Las Vegas, where all the bar flies hang out in the place that has become their second (or only) living room for one last time.

The Bloom of Yesterday

Historian Toto Blumen and his overstrung French intern Zazi work in the Central Office for the Investigation of National Socialist Crimes in Ludwigsburg. The two make up the most delightful screwball couple German cinema has had in years.

Nikias Chryssos debut picture about a student and the bizarre petit bourgeois family, who rent out their windowless cellar to him is a masterpiece of absurd cinema. 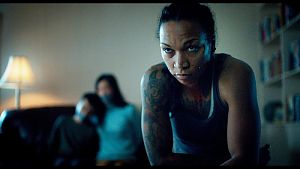 Catch the Fair One

Ex-boxer Kaylee has a mission: she wants to take revenge on the organization that drives girls and young women, many of them Native American, to prostitution due to a lack of prospects.

La Clave: they are ship nails that were later used as wooden instruments to create the rhythmic element that makes up Cuban music. “Clave“ also means key, and those who don‘t have it can‘t make Cuban music.

Mike lives in a small Canadian Town. His life is by no means catastrophic but still he wants call it quits. When a tumor is discovered in his brain he is relieved – at first. 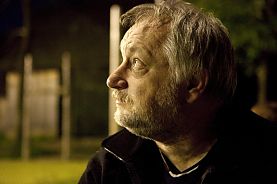 80 year old Ali travels to Vienna to look for the murderer of his parents, but instead of finding SS-Sturmbannführer Graubner he finds his son Georg. The two go on a search for traces in Slovakia. 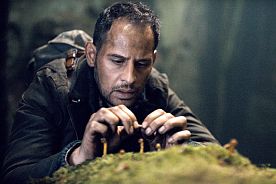 An adaptation of the novel of the same name by Swiss author Martin Suter THE DARK SIDE OF THE MOON tells the story of a successful business lawyer who falls in love with a hippie girl and tries a magic mushroom that unleashes his dark side.

The First, the Last

In Bouli Lanner’s strange road movie everyone, including the marginalized, the poor, and the old, finds their way in the apocalyptic wasteland.

In his documentary, Giuseppe Tornatore works out what made Ennio Morricone‘s music so powerful using a smart composition of talking heads and film scenes. 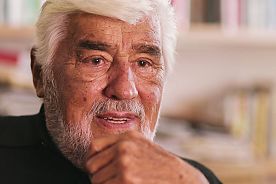 88 year old actor Mario Adorf is still influenced by the stage and screen today. He explains how he selected his role and what still fascinates him about acting. 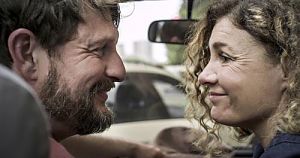 Alina and Nico are a couple. They invite Alina's parents to Nico's family country home with his parents for the weekend. The stage is wide open for unpleasant surprises and marital crises. 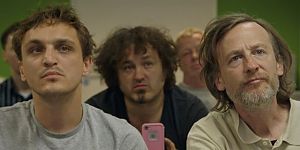 Rocky, a sleazy 50-year-old womaniser is trying to teach his 25 year old son how to get laid. Very dark and deliberately offensive comedy.

Mika Kaurismäki paints a clever and unconventional portrait of Queen Kristina of Sweden, one of the most influential European leaders of the 17th century. 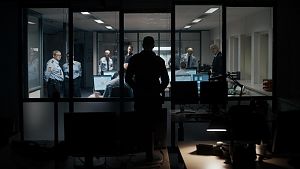 Asger Holm, a policeman working at a emergency center, gets an emergency call. A woman has been kidnapped and time is running out. All that Asger has at his disposal is the telephone.

Hanna grows up in a familiy that pretends to be catholic. In 1967 Austria, her parents, survivors of the Shoah, are ashamed of their Jewish identity, while around them, Austrian veterans still meet to sing nazi songs. 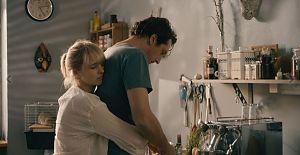 Arndt von Bohlen und Halbach, gay heir to the Krupp corporation, was forced to waive his inheritance in 1966. HERR VON BOHLEN shows postwar Germany as a society defined by homophobia and envy. 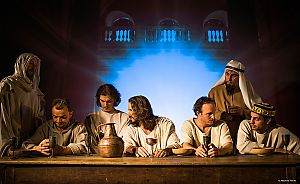 A Jesus campaign for a Bavarian whiskey brand is meant to help an ailing ad agency get back on its feet...

Physiotherapist Elisa starts off as a temp in Dünkirchen because she hopes to find her mother there who put her up for adoption and wants to have no contact with her. 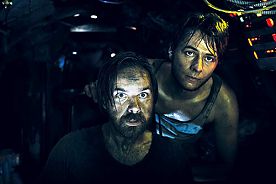 After years of handicraft and an engaged two week low budget shoot, director Barion and his team have created a chamber play-like trip to space that‘s quite impressive.

Shepherd Besnik discovers a Christian mural in a mosque. The realization that the religions cooperated in the past causes an upheaval in the strictly religiously segregated Albanian village.

Between French New Wave, art film, and mumblecore: Antek Liebmann spends his summer in a small village in Picardy. A summer tourist? An immigrant? Someone who is fleeing from something, perhaps from himself?

Ana, a young compliance manager, discovers suspicious figures in her company‘s bookkeeping – the thriller that unfolds was shot in one take by director Tim Dünschede.

Mike has been separated from his wife Claudia for 9 years, works in a crappy carwash, and is about to lose his apartment. But Mike has a plan: he goes camping with his 15 year old daughter and hopes that Claudia will get back with him.

Torsten is a “real life super hero.“ He fights for what‘s right, has tailored a superhero costume, and gives food to the homeless. When a documentary team wants to make a portrait of him, it‘s a sudden call for more action. 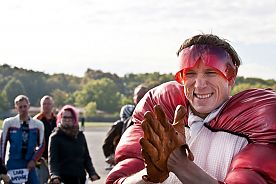 Timo Jacobs new Berlin film: Cowboy needs money to put his mother in an Elvis nursing home. That’s the starting point of this cinematic smorgasbord of the absurd with flashes of grandiose ideas that are shot down by streams of nonsense.

A physics lecture, a love story, a grief story, a thriller, a tragedy. Nora misses Aron, and Mariko Minoguchi spins a complex web made out of memory and clues in her debut. 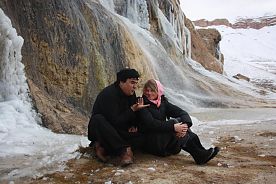 Salim Shaheen is the most successful film producer in Afghanistan. Sonia Kronlund, who is usually a French Afghanistan correspondent, accompanies Shaheen in his production of a no budget action movie that is just as inspired by Bollywood as it is by ...

Anders Thomas Jense, the master of macabre humor and moral and aesthetic vulgarity (IN CHINA THEY EAT DOGS, ADAM’S APPLES) sends two very different brothers on a trip to find their ancestors on a remote island. What they find is kin from hell: a ...

Bettina Blümner (PRINZESSINNENBAD) chose a Paris dance hall with flirty 70+ year olds as the setting for her newest documentary. The film shifts from their casual come ons in the dance hall to a more personal look at the protagonists who give ...

The documentary feature centers on the entrance examinations at the “Staatliche Schauspielschule Hannover”. The film focuses on the work of the nine examiners who have to judge hundreds of performances by aspiring actors. 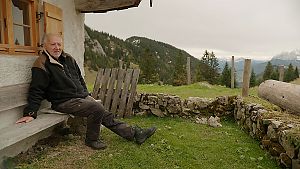 A documentary about the life and work of Werner Herzog, the autodidactic filmmaker who became internationally renowned for his eccentric films. 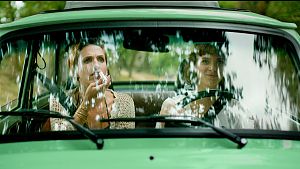 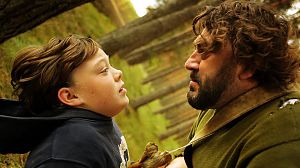 When Robby loses his little sister he obviously cannot go home anymore. Robby moves into the woods where he meets a very sly wizard and a rowdy outlaw. 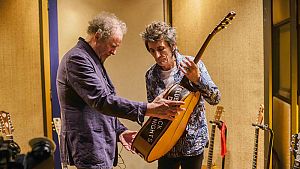 Somebody Up There Likes Me

Somebody Up There Likes Me | Großbritannien 2019 | Biography, Documentary | Mike Figgis | 6

Portrait of the Rolling Stones' second guitarist - never as much in the limelight as Jagger and Richards but just as fascinating.

A Royal Night Out

It is a historical fact that the young princesses Elisabeth and Margaret didn’t spent V-Day at Buckingham Palace. The romance that A ROYAL NIGHT depicts on that night is pure rumbustious invention.

The most popular Swiss children’s book after Heidi: a shepherd gets a measly, small bell for the spring festival and decides to go up the mountain pasture to get a giant bell.

When his father dies, insurance sales agent Mirko wants to sell the family’s junk yard. But he gets roped into a ludicrous scheme to rescue the yard by his brother, the dedicated “Schrotti” Letscho, instead.

Valentin receives an alarming call from his best friend Theo, who is in his new place with a waitress he picked up. When he comes to the house it’s dark, Theo is distraught, and someone is dead.

Eyal and Vicky buried their 25 year old son 7 days ago. Vicky wants to slowly get back to her life after the traditional week of grieving. Eyal, on the other hand, smokes medical marijuana that he swiped from the hospital with the neighbor’s son…

With his film TRISTIA Stanislaw Mucha embarks on an entertaining odyssey through all neighboring countries on the Black Sea. Historic antiquity hovers in the background – and in front of the camera the everyday reality of mountains of garbage and ...

After a brutal crime in their childhood, the older sister swears to her younger sister that she will always protect her. It has become an obsession 20 years later and the murderer is getting released from jail... 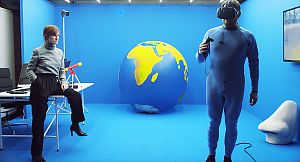 A political didactic play and joyful farce about the university business.

A documentary about the filmmaker, artist, and art historian Werner Nekes, who, amongst other things, is known for his cinematographic collection of pre and early cinema.

We are young. We are strong.

Burhan Qurbani's film is a fictionalized accuont of the xenophobic attacks against asylum seekers in Rostock-Lichtenhagen on 24. August 1992. He tells the story of helpless and clueless politicians and a group of young people who are angry, bored ... 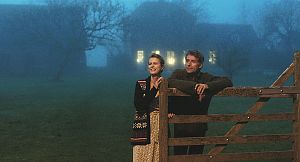 For thirty years couples Christine and Jean and Sylvette and Ulrich have been spending their holidays in their adjoining summer cottages in Normandy. Only the tides seem to change here… until early one morning Jean leaves Christine.

A couple‘s therapy escalates in real time. After Michael Kriehsl‘ DIE WUNDERÜBUNG successfully staged the play in Josefstadt, he has now directed the screen adaptation. 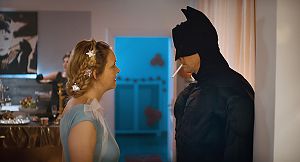 In the cinema Hans and Heinz, who have been together for a long time, discover that their love is missing some romance. They try everything in order to conjure up the supposedly necessary sparks.