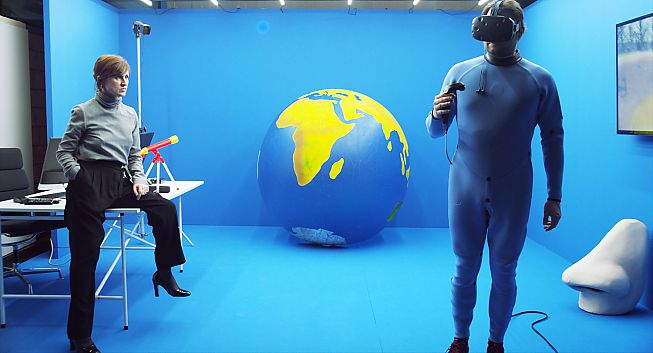 A political didactic play and joyful farce about the university business.

Excellence projects and evaluations, feedback and workflow, external funds and figures, nudging and coaching: director Max Linz has crafted a joyful farce about the university business where neoliberalism and turbo capitalism comes at the expense of reedom, knowledge, and the environment. Phoebe Phaidon has a small teaching position at the institute of cybernetics and simulation, she collects data in a nudging app in the cafeteria. The complicated formulas for the aesthetic condition doesn‘t interest the students nor the professors, a turtle enriches a seminar, the students strike in the midst of inept presentations and stupid lectures, and occasionally a song is sung. Linz learned from Brecht: the presentation and portrayal drift apart, destroying illusions, taking on theoretical discourses and knowledge lethargy in artifically stilted dialogue with minimal expressiveness. This is a political didactic play done in an inflammatory way – and presented as a satirical comedy, a situation comedy with nonsense jokes that ruthlessly makes fun of the idle speed of the scientific knowledge machine.

Can crucial questions about university, knowledge, and truth, life, and taking action actually be entertaining? Definitely. Linz is an offspring of political Berlin comedy scene where bourgeois dogs practice self-criticism and girls are melancholy: a generation of new filmmakers that transform critical theory into sharp film practice and pour necessary political change into absurd cinematic worlds. And when the feared evaluation arrives the world does collapse but things do carry on, not to worry.