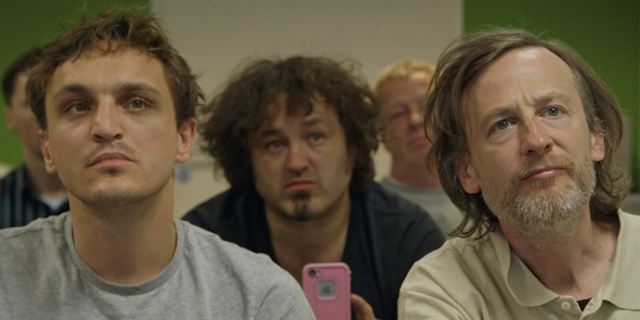 Rocky, a sleazy 50-year-old womaniser is trying to teach his 25 year old son how to get laid. Very dark and deliberately offensive comedy.

Such great catches have never been seen on the big screen before! Rocky is 50 and he loves all women – as long as they aren‘t older than 25. Thorben is (probably) Rocky‘s son (or one of them). It‘s clear to Thorben: the supermarket cashier wants him because she has breasts. Locked up for rape, he gets out of the mental institution and goes to learn from Mr. Dad.

FIKKEFUCHS is so radical, so pervadingly ironic, so very nasty, that it‘s a lot of fun to watch – even if your desire to reproduce will dwindle because of it. Jan Hendrik Stahlberg delivers a masterpiece of immorality and plays the main role. He doesn‘t shy away from anything in his images. He turns the audience into peeping toms and accomplices – especially when they hit on women as part of a coaching workshop. tahlberg makes himself seem so pathetic that it‘s almost too hard to take. What the two drunk heros do in the bathtub cannot be described – it is absolutely tremendous in an underhanded way!