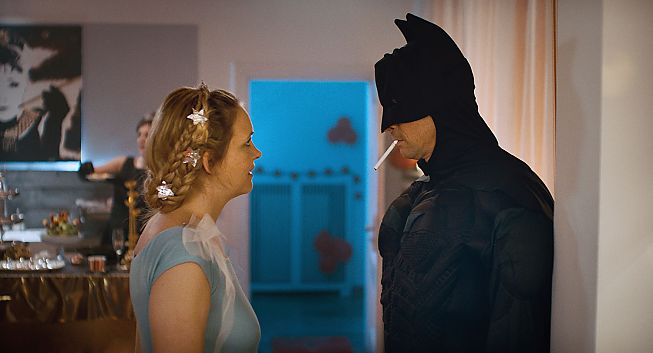 In the cinema Hans and Heinz, who have been together for a long time, discover that their love is missing some romance. They try everything in order to conjure up the supposedly necessary sparks.

Happy endings in cinema: the couple on the beach, the marriage proposal, the kiss in the end – it all feels fake to Hans and Heinz. It doesn‘t have a lot to do with real life. They‘ve been together for 8 years, play on their playstation in the evening, and joke around ironically when something seems corny. Pragmatism instead of romanticism: they live above a copy shop run by Hans, their ancient car doesn‘t drive in reverse. They have sex roughly every two months, it‘s not worth taking the pill for that, and the fact that Hans gives his girlfriend the nickname Heinz speaks volumes. This couple doesn‘t expect much out of life or themselves until Heinz/Laura notices something is missing: “This isn‘t true love!“ - “Why not?“ - “Because things are missing!“ Maybe life is wrong, but films are right? They desperately try to make up for what seems to be missing. The magic of the first encounter. A night in a love hotel. Even Heinz‘ attempt to make Hans jealous is a grave misstep; and their mutual teasing is lost as well.

Following her playful and loony psychocomedy MÄNGELEXEMPLAR, director Laura Lackmann structures this unromantic comedy in a straightforward way with some well-placed fissures. Marc Hosemann and Laura Tonke play the bored couple whose daily life constantly alludes to other films without becoming overly referential. Hans and Heinz‘s life is somewhere between real life and the wrong film – and the attempts to reach the cinematic happiness always go wrong in a funny, but not theatrical way. Maybe the dream of the perfect house, garden, and a family is wrong. Just as wrong as a happy end on the beach. Right?