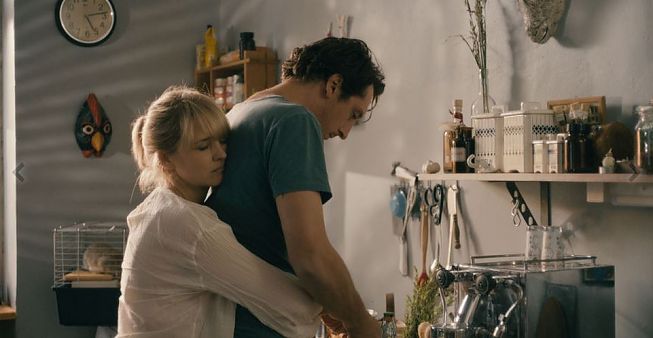 Hedi Schneider wears clothes that are a bit too colorful and talks a little too much. Hedi Schneider is happy in a hyped up kind of a way but not dislikable and reminiscent of Sally Hawkins in Mike Leigh’s HAPPY-GO-LUCKY. Hedi is funny, lovingly plays with her kid, and has an intimate, fun-loving relationship with her husband.

Hedi Schneider is happy - on the surface. One day she finds out that a colleague almost tried to kill himself. At first, things seem normal at home: she plays doctor with her son and a more adult variation thereof with her husband which triggers an unremitting feeling of numbness. No, it isn’t a stroke but a very intense and totally unexpected panic attack. Hedi falls into a deep depression.

Director Sonja Heiss has made a kind of miracle with HEDI SCHNEIDER STECKT FEST: it’s a comedy about a chronic anxiety disorder. She uses her own experience but makes it different from her life. The way in which Laura Tonke embodies Hedi is unique, splendid, and nuanced. The film as a symptomatic example of the unfulfilled, elusive search for happiness and is not about sickness alone.

HEDI SCHNEIDER STECKT FEST is psychologically precise, funny, and above all, honest. Unwell people are not shown as pitiful victims though Hedi does develop an egocentric, self-pitying streak which is understandable since she feels so horrible. It is also taxing on her husband Uli who now has to be a caregiver and her son Finn who misses his affectionate mother. The situation is observed from outside, with an attentive yet unsentimental camera.

And somewhere amongst the pill-induced haze, the fights, the highs and lows of a mental condition, somewhere within this family that is drifting apart, a new beginning might be found.