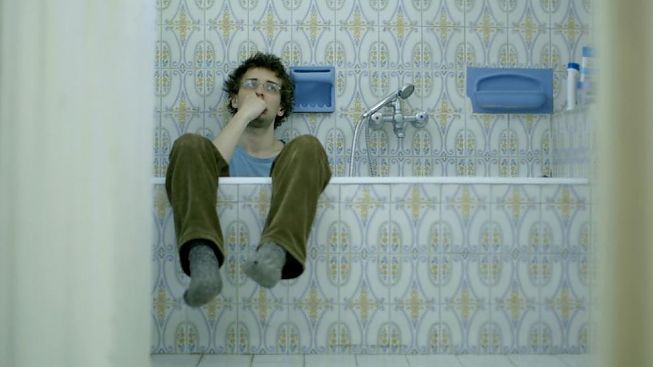 Schlubby Aron just can’t seem to get a break from his friends, his mother, and life in general.

His ex took his books, his kitchen magnets, and even his hair from the drain. Aron is filled with self-pity, even more than before. He is a hopeless slacker in Budapest, an expert procrastinator who likes to dwell on his complex inner world that is consistently out of alignment. Yet he makes an effort. He is looking for a pretty ticket inspector called Eva Tinte and goes to the employment office. Something happens with him and his life there: he buys himself a ticket to Lisbon while inebriated. That doesn’t make him an active person though, he can also continue doing nothing in Portugal.
Gábor Reisz portrays a break-up in a funny and shrewd way: Aron’s story incorporates his friends that don’t listen to him, his mom that takes care of everything for him, and the perfect life that other people seem to be leading. Reisz keeps giving a platform to the supporting characters that seem to promote their lives in front of the camera: there’s also a musical bit at some point. The many small, surreal moments lead to poetic absurdism as well as hidden truthfulness. Reisz probably knows what he’s talking about: the director can be seen wearing the same clothes as Aron in the credits.