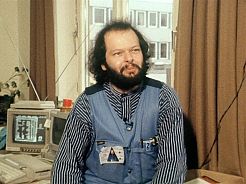 The Chaos Computer Club (CCC) was founded in 1981 in the editorial offices of taz and has been fighting for open communication, freedom of information, and the protection of personal data ever since.

Bavarian direktor Franzi and Indian co-director Jay are a couple. Both of their parents absolutely hate the idea. A documentary about inter-cultural relationships and family. 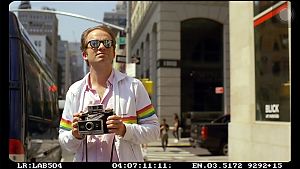 Shot on 35mm film with an Arriflex 35 SL, the documentary about the saviors of the last Polaroid factory creates an analogue dream portrait that‘s somewhere between start-up euphoria and nerd admiration. 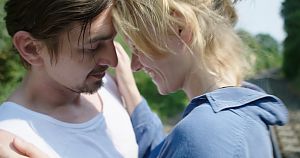 A flatshare in Brandenburg. Roommate Maya brings a series of men to her bedroom, her mother Charlotte tries her hand at dating sites, and Kerstin still believes that her man will reappear one day.

Chavela Vargas is a singer of Mexican love songs, unloved as a child and discriminated against because of her homosexuality. She leads a life of extremes: frenetically celebrated, forgotten, and rediscovered. A documentary. 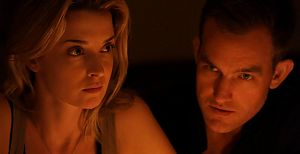 This low-budget production about the bizarre side effects of a bypassing comet fuses realistic drama with an extremely confusing Sci-Fi-Horror plot involving multiple realities. 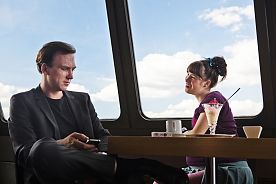 18-year-old Dora is mentally challenged. When the young woman begins a sexual adventure, this leads to a dramatic divide in the parent-child relationship … DORA treats the issue in a sensitive and smart way – the line between self-determination ...

Duisburg’s Marxloh district has become a European Mecca of bridal wear. DÜGÜN talks to wedding businesses, couples and their parents and takes a look at look at this major ritual in the lives of Turkish immigrants in Germany. 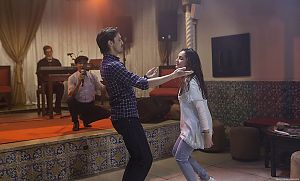 Three finely observed stories in current-day Algeria are set in a slum, an upper-class apartment, and the countryside and show a country that is on the search.

What is the food of the future? What would it be like if we never ate animals again, what would our coexistence with them look like? THE END OF MEAT asks many experts and activists from all over the world these questions. 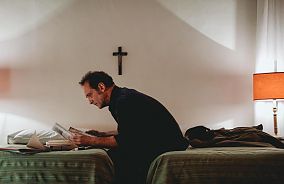 Experienced and war traumatized journalist Jacques is sent by the Vatican to head an investigative commission meant to get to the bottom of a Marian apparition in rural southern France.

The seasoned team that made KOMM, SÜßER TOD, SILENTIUM and KNOCHENMANN has struck again. Brenner, a bit closer to the edge then usual, moves back to Puntigam, Graz, to the house he grew up in, the place where he did his police training, thus ... 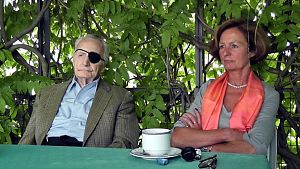 Ever since he wasted his wife’s fortune money is all Jonas Rothlaender’s grandfather talks about. Rothlaenders documentary film is an attempt to understand his grandparents’ silence and, maybe, break it. 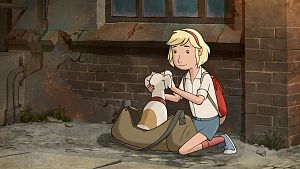 FRITZI follows the adventures of a small girl from Leipzig when the GDR broke down.

The older men acting in the theatre piece “Gardenia” are living between genders, either as transvestites or transsexuals. They take to the stage one last time. 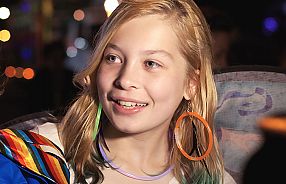 Maya Newell, who grew up as a ‘gayby’ herself, asks four teenagers, who were raised by parents who live in same sex relationships, about their lives and opinions.

Christian Labhart’s documentary about landscape painter Giovanni Segantini, a contemporary of van Gogh, Monet and Gauguin, relates his hyper-impressionist paintings to the stations of his life.

Kate, the wife of a successful lawyer, is suffering from ALS. Her husband cares for her lovingly but Kate doesn’t want to be seen as a patient. She fires the nurse he hires to help him out and instead hires the chaotic student Bec who has little ...

A young Catholic priest takes matters into his own hands to increase the birth rate in the community on a small Dalmatian island. Together with the local pharmacist he sabotages all forms of birth.

HOCKNEY explores the world of the happiest of pop artists: David Hockney. In a dense assemblage of interviews with friends and colleagues, visual explorations of his works and filmic experiments from his own private archive. 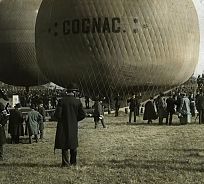 A documentary essay that combines quotations from war diaries and letters with historical photographs and slides from the First World War that were taken with a stereoscopic camera, the precursor to 3D.

In this over-the-top comedy director Riad Sattouf invents an imaginary dictatorship in which women rule, men have to cover their bodies at all times and are not allowed to do other than domestic work and everybody is forbidden to eat fresh ...

The journey with Elvis‘ rolls royce across the US connects the portrait of a musician with an inventory of US society today.

Peter and Heinz, both retired, work as 'gentleman host' on cruise liners. Their job is to charm the female passengers, dance with them and help to dispel loneliness. It's a safe game with fixed rules both they and their clients enjoy. 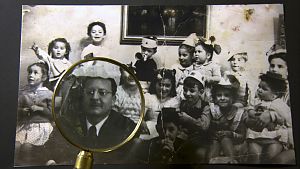 The documentary follows the granddaughter of Salvador Allende, the first elected, democratic-socialist president of Chile who was killed in a military coup on September 11th 1973, as she seaches for the traces of his legacy.

German doctor Martina is kidnapped by a Sunni group on the border of Iraq. She is believed to be involved in an arms transportation. The IS and the BND are soon also part of the plan. A tautly told German political thriller.

Rome in the mid-1980s: 9-year-old Aria is constantly shuffled to and fro between her mother, a pianist, and her father, an actor. In bright colours and playful scenes pop icon Asia Argento tells the story of a nightmarish childhood. 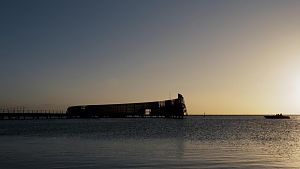 The directorial team of NEAR AND ELSEWHERE are searching for approaches for urgently needed change in the way we think about progress in this partially acted essay film. 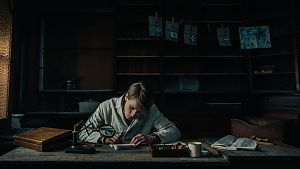 Berlin in the early 1940s: graphic designer Cioma Schönhaus is “allowed“ to remain in Berlin as a Jew because he is obligated to work for the arms industry. He secretly works as a passport forger and dares to be incognito in the middle of the ...

The Brazilian lifeguard leaves his job and family behind to follow his German lover to Berlin. He is torn between his two worlds and the lure of the ocean and beach.

The Brazilian lifeguard leaves his job and family behind to follow his German lover to Berlin. He is torn between his two worlds and the lure of the ocean and beach.

PRIVATE REVOLUTIONS is a portrait of four women during the Arab Spring. Amani is the founder of a radio station and a publishing house. Fatema was part of the founding committee of the Muslim Brotherhood. The Nubian May gave up a successful career ... 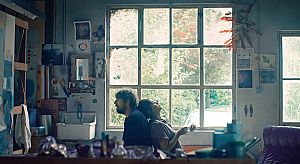 Damien has bipolar phases. Leila fights hard for the stability of her husband and their family. The actors convey a convincing gentleness and joy towards each other and also the latent aggression and confidence crises.

RUINED HEART tells a simple love story between a small gangster and the wife of his boss as “Punk Noir” musical between dream and nightmare, featuring hallucinogenic cinematography by Christopher Doyle.

SCULTURA observes the proces involved in creating one of the Italian artist Velasco Vitali dog sculptures – from the wax model to the manufacturing of the casting mold and finally to the casting of the sculpture.

Isabelle Caro, who campaigned as the “No Anorexia” model in 2007 tells her story – with the goal of helping other afflicted people quit their addiction. 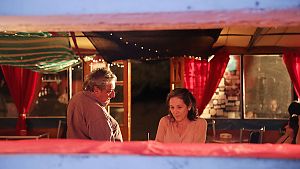 After decades with the same family, housekeeper Teresa has to start a new job. Her trip is interrupted by a series of coincidences that open up new avenues for her.

Val has been a live-in maid, cook and nanny for a rich Brazilian family for more than 20 years. She hasn´t seen her daughter Jessica for years. When self-confident Jessica comes to São Paulo, the strict class regiment in which Val lives gets ...

Kaito and Kyoko live on a tropical island in the very south of Japan. First love blossoms, as events in their families force them to review their positions in life.

Three family members and a stranger clash in Nana Neul’s summer film set in a vacation home in southern France. New romantic liaisons are made and old secrets come to light.

SUFFRAGETTE follows the trajectory of Maud Watts (Carey Mulligan), a laundry worker and young mother, who turns from interested bystander into a committed suffragette standing at the side of bomb-laying Edith Ellyn (Helena Bonham-Carter). 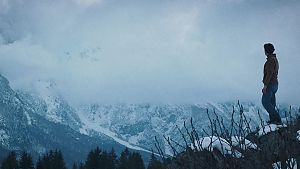 Hana has chosen to live according to the law of the “Katun” that is still practiced in the remote regions of northern Albania as a “sworn virgin”, a man. When Hana, or Mark as she calls herself now, emigrates to Italy s/he has to once again ...

A doctor doesn’t open the door after closing hours and is thereby complicit to the death of a young woman. While searching for the identity of the “unknown girl” she sees an indifferent society that is at least as responsible as she is. 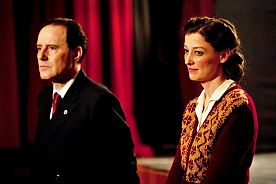 Three women who migrated to Moscow in the 30s return to the GDR in 1952 where they‘re welcomed with open arms. They just can‘t talk about being in labor camps during the Stalinist cleansings. 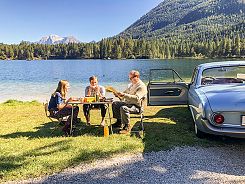 In her autobiographical hybric feature film, director Petra Seeger traces the personal and makes the collective structures visible that make up the “more subtle reasons“ why so few women break the glass ceiling.

Fúsi is around 40, obese and still living with his mum. When her partner finally kicks him out, Fúsi nilly-willy confronts life as an adult. Dryly humorous Icelandic comedy by Dagur Kári (NOI ALBINOI).

In the Congolese civil war women were systematically raped as a method of war. In VOICES OF VIOLENCE they speak of their trauma and demand justice at the risk of becoming a target once again.

Of Girls and Horses

A remote horse farm in northern Germany. Alex, school dropout, drug addict and troubled teenager meets Kathy, an overprotected, friendly, rich girl. Both learn something from their encounter and from life on the farm.

In Cyprus, young soldiers Aurore and Marine deal with the psychological repercussions of their tour of duty in Afghanistan. 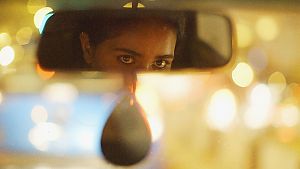 Young Devki wants to become a taxi driver though her family and patriarchal Indian society are against it. A documentary. 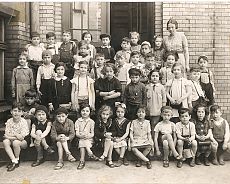 Jewish survivors of the Polish city Breslau remember their youth, the rise of Nazism, flight, expulsion, and the loss of their families during the Holocaust as well as their new beginnings in Israel and the US. 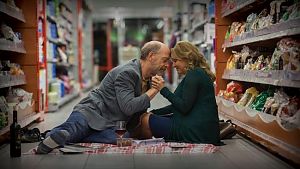 Dany, young, poor, gay and a child of immigrants, is searching for his unknown father. XENIA sends him and his older brother on a modern day odyssey through contemporary Greece.

Rani and her friend Laajji live in a suffocating patriarchal village in remote Gujarat. When they meet dancer and prostitute Bijli, whose outlaw status allows her to move more freely, the three women begin to dream of a different life.

ZERO DAYS by Alex Gibney delves into the story of the computer virus stuxnet that attacked an Iranian Uranium factory in 2010.