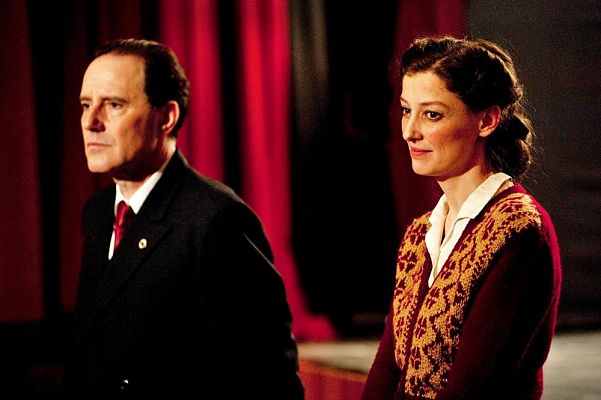 Three women who migrated to Moscow in the 30s return to the GDR in 1952 where they‘re welcomed with open arms. They just can‘t talk about being in labor camps during the Stalinist cleansings.

The revolution isn‘t a wish list. The three German women who returned to their home, now the GDR, in 1952 after being in a labor camp had to experience that for themselves. They moved to Moscow in the 1930s as committed communists and became innocent victims of Stalinist cleansings while there. Now the women aren‘t just being received with open arms by the GDR, they are also taken care of very well: with an apartment, a workplace, and even a TV. The only condition for this working-class paradise: no mention of the injustice they experienced and the conditions of the camp. While Antonia (Alexandra Maria Lara) is able to integrate well after feeling strange about not being allowed to speak in the beginning – it‘s in the interest of communism not to harm the young socialist republic – her other two colleagues are finding it much harder to deal with the trauma they suffered and keeping a lid on their bad experiences. This is how Antonia‘s lover, the idealist doctor from Hamburg (Robert Stadlover) discovers that not everything is going according to plan in his adopted home. The conflict between the social desire for change and individual fate dramatically comes to a head. Director Bernd Böhlich (KRAUSE), who also wrote the screenplay, based the film on real events of a taboo part of left-wing history without leveling the ambivalence or exposing the revolutionary promise of freedom and brotherhood. The focused camerawork of Thomas Plenert (HERR ZWILLING UND FRAU ZUCKERMANN) forms an empathetic and thoughtful way of seeing.