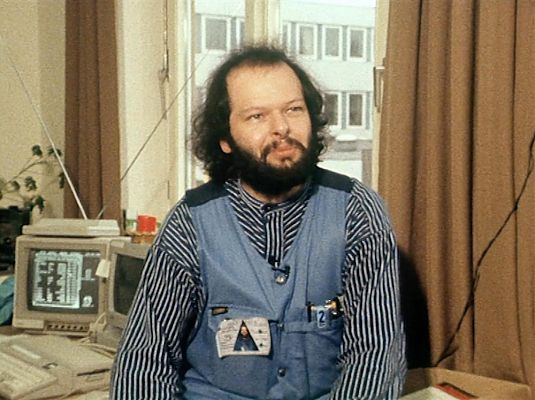 The Chaos Computer Club (CCC) was founded in 1981 in the editorial offices of taz and has been fighting for open communication, freedom of information, and the protection of personal data ever since.

Those who are preparing for war will try to stop people from communicating. People who talk to each other don‘t start attacking each other. This pacifist view is one of the foundations of Chaos Computer Club, or CCC for short, who fight for open communication, freedom of information, and the protection of personal data in Germany. During the Covid-19 crisis they heavily criticized the Luca App, and the hacker association set up an independent media center at the G20. “Dr. Wau‘s Chaos Computer Club Film“, the subheading of ALLES IST EINS. AUSSER DER 0, shows the history of CCC in a quickly edited mixture of private and TV archival material, animation, found footage from the contemporary news as well as ads, punk concerts, and the film 23. The wild video and image medley is given some structure by narrator Peter Glaser, the former editor-in-chief of the CCC paper “Datenschleuder“ (trans. data slingshot) and tied together with the soundtrack of Alexander Hacke. This allows for an overview of various striking point: from the founding of CCC in 1981 (in the editorial offices of taz!) to the media-savvy BTX and the frightening NASA and KGB hacks as well as the connections to Snowden and Wikileaks. There‘s a lively feeling of zeitgeisty inclusion of creative tech activists – and by the by it‘s also a loving portrait of the deceased central founding member and CCC philosopher Dr. Wau. One of his messages is more timely than ever: there‘s nothing better than direct experience and interpersonal exchange without media intervention, screw the virtual reduction of encounters!