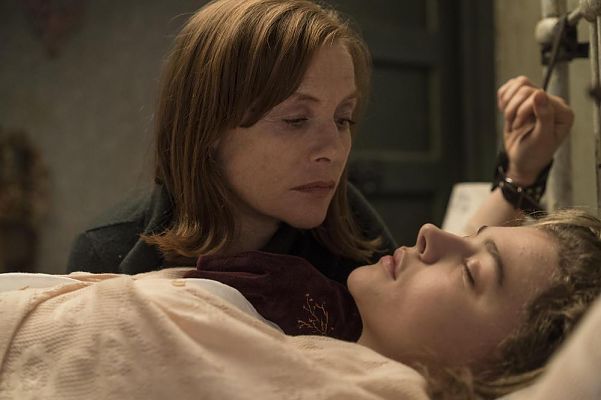 The camera moves with determination across a New York subway station inside a train to an abandoned handbag. Seamus McGarvey‘s (NOCTURNAL ANIMALS) visuals are constantly in motion and are always aimed at a supposed objective which could be revealed in the next pan. GRETA plays with this foreboding, which lets its protagonists slide into a modern paranoid thriller filled with urban cynicism. Young Frances ( Chloë Grace Moretz) is nice enough to bring over the bag to an older woman since her ID was inside. Greta (Isabelle Huppert) insists on inviting her to tea as a thank you. The camera follows a choreography made up of calculated gestures which generates a co-dependent relationship between the two within minutes. Greta first talks about her dead husband, then about her daughter in Paris. Even the dog is dead – everyone leaves her. Frances opens her with open arms because she‘s been a half-orphan for a while and has a bad relationship with her father. Both of them can fill holes in each other‘s lives. The downward spiral starts to turn when Frances finds replicas of the handbag with the addresses of other girls in Greta‘s closet. Suddenly the older woman who was so technophobic before scrutinizes her surrogate daughter‘s facebook profile and increasingly mutates into a menacing stalker. Even though GRETA never becomes a ghost story, it is a film about the ghosts of the digital era like Olivier Assayas‘ PERSONAL SHOPPER. Isabelle Huppert‘s Greta is an almost disembodied threat that becomes destructive because of her constant immediacy.