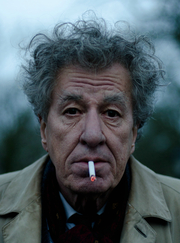 Stanley Tucci develops a multi-faceted portrait of Alberto Giacometti, a choleric and amusing genius, based on the notes of author James Lord who posed for the famous painter and sculptor.

A run-down studio in Paris in 1964. Alberto Giacometti shuffles between his lanky, small-headed, and popular sculptures. He sculpts a bit, smokes, coughs, and throws a failed piece on the floor. His brother Diego, who assists him, isn’t shaken up about it; young author James Lord has been warned. He models for Giacometti shortly after.

In his entertaining biopic, Stanley Tucci depicts the daily life of the famous sculptor and painter, particularly his inner battles and troubles. Giacometti is seemingly never happy with his work and deals with the impossibility of fully completing a piece. This emotional dilemma requires a stage with a patient audience like Anette, his wife, his brother Diego, and the alternating models James and Caroline, a hyped up prostitute.

Tucci developed a multifaceted portrayal of a nerve-racking creative process based on records that don’t just give insight into Giacometti’s inner world but also offers funny gossip about artist colleagues interweaved with philosophical observations. Giacometti created and destroyed in a fort, led an unhealthy life, rejected anything bourgeois, loved troubled and easy girls – you can’t get more bohemian than that. Geoffrey Rush, who resembles Giacometti quite a bit, is ideally cast as the choleric and amusing genius. Rush injects some necessary vitality into the workmanlike plot and acts out the repertoire of the male ego in a virtuoso manner.