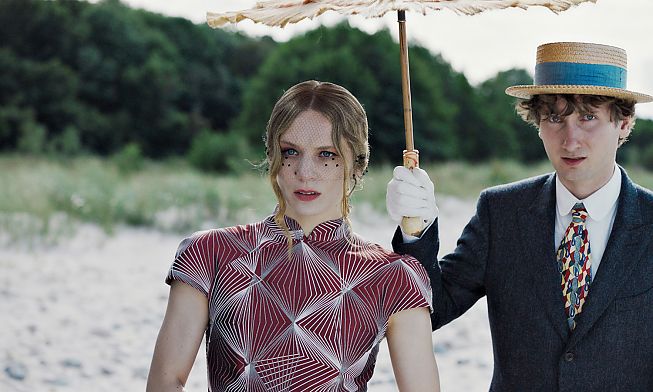 The basic concept of Julian Radlmaier‘s BLOODSUCKERS is taking the vampire metaphors found in Marx‘ Kapital seriously, for once. So the capitalists are literal vampires and the exploited workers often awaken from their slumber with bloody bite marks – and the middle-class stubbornly insists that Chinese fleas are the cause.

This Marxist vampire film is as thrilling and creepy as its setting, a sleepy small town on the Baltic Sea in the 1920s. Vampire hunting only occurs in a silent film made for fun; most of the time Radlmaier has his purely symbolic characters (among them a lazy fake Count who fled from the young Soviet Union, a factory owner with an insufferable penchant for the romantic, and a somewhat desperate Marx reading group) utter excellently written, surreal dialogue, linking it to Godard and Buñuel‘s funny adaptations of leftist discourse.

However, BLOODSUCKERS isn‘t pure satire, just the opposite: behind the surreal setting is a parable of the bloody ideological battles of the Weimar Republic and the mass media demagogy of the Nazis. The constant alienation effects (the Baltic resort of the 1920s is populated by kite surfers and motorcycles) aren‘t just there for comedic effect, but to update the historic scenario. BLOODSUCKERS seems to question the relevancy of Marxist categories today, like when the personal assistant of pontificating Rosa from the Marx reading group defiantly says: “I don‘t manufacture anything, especially no additional value!“