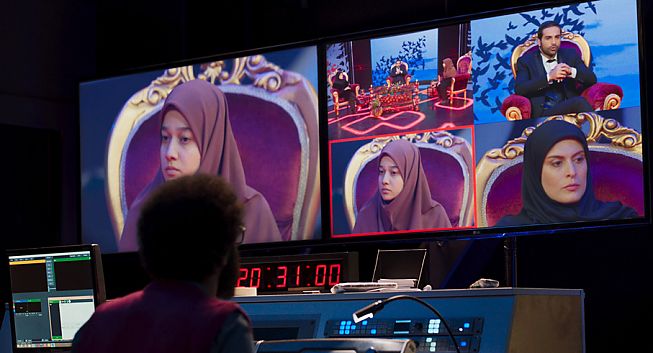 Yalda, a Night for Forgiveness

In the fictional reality show “Joy of Forgiveness,“ the 22 year old Iranian Maryam Komijani who has been sentenced to death is fighting for her life: if the family of the aggrieved forgives her, she can be pardoned.

Tehran-born documentarian Massoud Bakhshi negotiates with the Muslim law of retaliation and forgiveness which the Iranian legal system is oriented on in his second feature film. According to this law, prisoners who are sentenced to death can be pardoned if the family of the aggreieved forgives them. In the fictional reality show “Joy of Forgiveness,“ Maryam Komijani (Sadaf Asgari) has to ask for forgiveness to avoid the death penalty – the 22 year old Iranian‘s future is decided on in between celebrity guests, advertisements, and text message voting. The young woman faces pressure from all sides. Everyone decides for her, pushes her, begs her, demands of her. No one asks what Maryam wants or needs, so she has to fight for it herself.