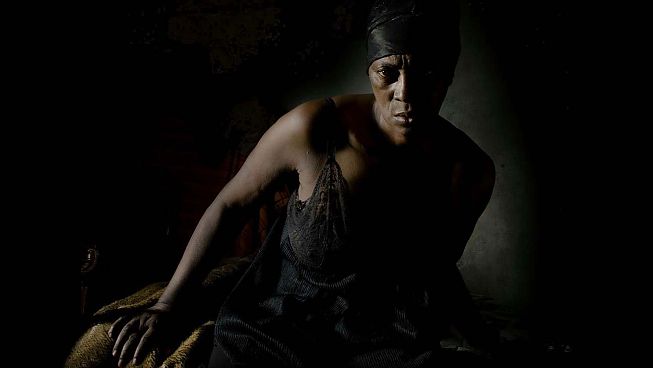 Vitalina Varela, 55 years old, Cape Verdean, arrives in Lisbon three days after her husband’s funeral. She had been separated from him for 25 years and now, piece by piece, discovers them life he led and hid from her.

After waiting for a plane ticket leaving Cape Verde for 25 years so she can join her husband who fled, Vitalina Varela departs from a plane in Lisbon. It‘s nighttime, a group of people living in precarious situations like her are waiting on the tarmac to tell her her husband just died and that Portugal has nothing to offer her. Vitalina stays. She searches for traces of her dead husband, his broken promise, his suffering, his futile hope for a better life in Europe, their past together, and the future that was never realized.
This summary doesn‘t do Pedro Costa‘s film justice, and neither does the fact that Vitalina Varela is playing herself, a non-professional actress with unforgettable expressions that has experienced the narrative in real life.
VITALINA VARELA is a work of art, shaped by light and shadow, sounds, walls, and faces. Every single shot of the film displays a visual abundance and artistic gravity that is reminiscent of the expressionist cinema of the 1920s or the photographs of Helmar Lerski. You want to merge with the images and brush against every surface of the sunless dungeon of Lisbon‘s Barrios Fontainhas, which Costa has filmed in each of his films so far, in order to understand the pain of its residents. The long shadow which colonialism and global work migration casts can‘t be driven away by the literal bright spot at the end of the film, people live in these shadows and wait, drink, and cry.