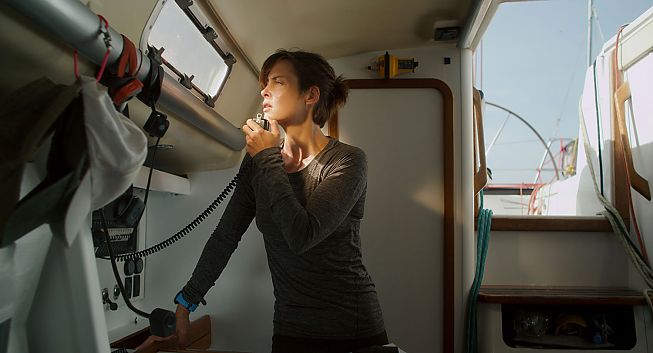 Hobby sailor Rike sees an overcrowded refugee boat that is about to sink off the coast of Africa. The coastguard demands that Rike should stay away and promises to send help, but no rescue boats are coming.

STYX was the best film at this year‘s Berlinale. Wolfgang Fischer has made a film that is simultaneously relevant and cinematically stunning, a film that takes a stance, a political and artistic one. Susanne Wolff is Rike, an emergency doctor on vacation who wants to sail alone on her sailing yacht from Gibraltar to Ascensíon Island – a small, once barren island in the southern Atlantic where Charles Darwin and Joseph Dalton Hooker set up a functioning eco-system in the middle of the 19th century. With inner calm and sovereignty reminiscent of Robert Redford in J.C. Chandor‘s ALL IS LOST, Rike prepares for the journey, packs drinking water in all the available storage spaces and brings provisions for weeks. Like Chandor, Fischer does without narrative padding. We don‘t find anything out about Rike‘s background and never leave the one location, the small boat. We look on in fascination at how the present unfolds without any special effects. Rike sails in the southern direction. A freighter gives her a radio signal after some time. There will be a storm, she should get in touch if she needs help. After the storm, Rike sees an overcrowded boat with refugees and informs the coast guard. They order her to stay away in order not to cause panic and promise to send help. Rike stays there. No help is coming for hours and the situation on the refugee boat gets increasingly worse.

STYX is concrete, physical cinema. It was shot in the ocean with real weather on a small yacht. The encounters that Rike has occur daily in real life. At the same time, STYX is a political manifesto that vehemently accuses Europe of staying passive while the others cross the river to the underworld. It‘s more current than ever.