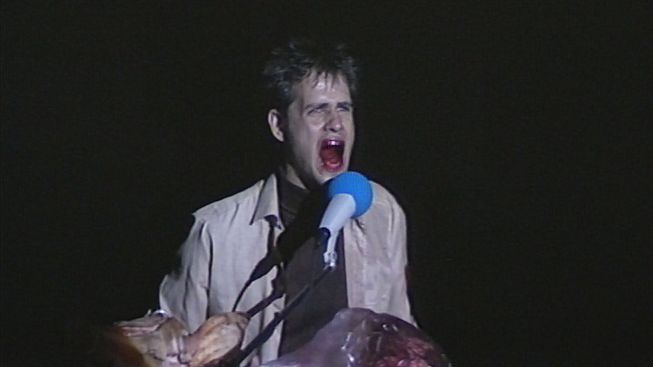 A documentary on German film and theatre director Christoph Schlingensief (1960-2010), assembled entirely from his films and interviews.

Christoph Schlingensief discusses his artistic awakening in the beginning of the film: an accidental double exposure from his father’s super 8 vacation film turned it into a surrealist art work which left a deep impression on 10 year old Christoph Schlingensief. The double exposure can be seen as the symbol of Schlingensief’s artistry. As the artist tells us in Bettina Böhler’s SCHLINGENSIEF- IN DIE STILLE HINEINSCHREIEN, he was interested in the connection between the art work and its contradictions for all of his life. He invoked the autonomy of art on one hand, its freedom and critical potential of realization and provocation. On the other hand, he vehemently tried to carry over art into political life and held the mirror to a latent racist and fascist mainstream society in an avant garde manner.
The provocation of mainstream society isn’t the result of his art, it’s rather the premise. The political actions are secondary to the figure of Schlingensief as a provocative artist. This subjectivism doesn’t break open in SCHLINGENSIEF – IN DIE STILLE HINEINSCHREIEN, since it solely consists of archival footage in which the artist talks about his life’s work. Instead of grappling with the consequence of individual actions in detail or reconstructing a relationship between artist and society away from romanticization, Bettina Böhler goes through Schlingensief’s entire oeuvre, from the first children film to the last art installation. This is why the first primarily serves as an overview about Schlingensief’s work as well as the political milestones in German postwar history.