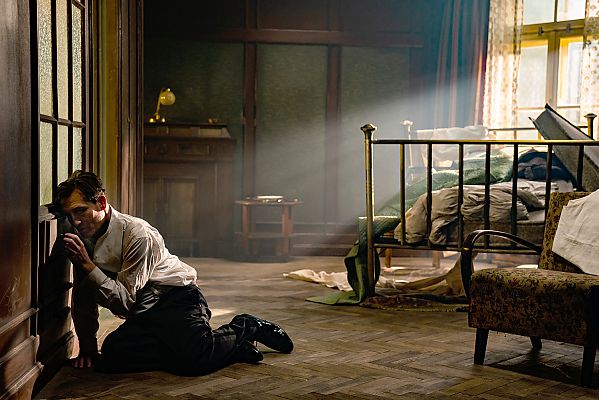 The impressive, partially shocking psychological portrait of an indomitable character. A new adaptation of “The Royal Game.“ This text was to become Stefan Zweig‘s farewell letter: just months after finishing the 90 page work, the humanist and pacifist chose to commit suicide while living in exile in Brazil. Similar to the literary role model, Philipp Stölzl‘s (NORDWAND) adaption begins with the protagonist going into South American exile during the Nazi era (quote from Stefan Zweig: “on the big passenger steamer, which departed from New York to Buenos Aires at midnight...“). The flashbacks reveal all of the torture he had to suffer beforehand, like the month-long “special treatment“ by the Nazis in Hotel Métropole – in the film it is primarily represented by the creepily polite and deeply diabolical Albrecht Schuch. The film finds deeply moving images to show how Bartok (known as “Dr. B“ in the original text) tries to defy the mental deprivation of solitary confinement by reenacting chess plays. They would not have his effectiveness if it weren‘t played by Oliver Masucci (WERK OHNE AUTOR), who has become one of the most thrilling local actors in recent years. Terrence Malik‘s splendid but overlooked film A HIDDEN LIFE comes to mind more than Ingmar Bergman‘s classic of chess cinema THE SEVENTH SEAL. In A HIDDEN LIFE, August Diehl plays a kindred spirit of Bartok – someone similarly unwavering against Nazi terror. “Everything I was able to give,“ writes Stefan Zweig in his letter, “I owe thanks to a certain enthusiasm: I understood how to captivate others… .“ How true.