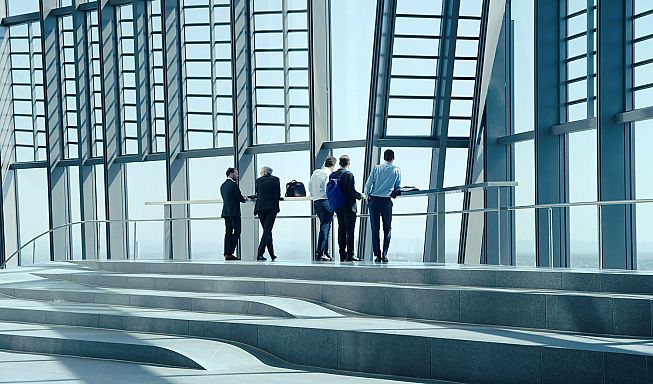 In her documentary OECONOMIA, Carmen Losmann has made it her lofty objective to understand the global financial system and make it understandable to others.

In her documentary OECONOMIA, Carmen Losmann has made it her lofty objective to understand the global financial system and make it understandable to others. The latter turns out to be quite difficult since the film‘s pace is fast and the amount of information is overwhelming. It would‘ve made sense to give the artistic side of OECONOMIA more space so that viewers had time to reflect on all the new ifnormation. The restrained camera angles of Losmann‘s cinematographer Dirk Lütter mirrors the slick aesthetic of the financial world in an appropriate way. The glass facades of EZB, BMW, and the Deutsche Bank are both open and closed at the same time, just as smooth and cheerless as Losmann‘s interview partners who she meets in those offices. We often only see an electronic access barrier or hear a reenacted phone call because a filming permit was revoked at the last minute – the information is very close to becoming criticism.
However, the director tries to ask the questions in an open and unbiased way. Her pursuit of information isn‘t aimed at being a moral dismissal of capitalism, but at the logical circular arguments that underlie its structure. The interviewees – who are all in the financial sector and white men – only seem to notice these circular arguments when Losmann‘s asked her questions in a markedly naive way.
The attempts at transforming her ambush into charming confidence aren‘t just amusing, but also comforting. You also feel ambushed during these 89 minutes when the director summarizes her interviews into bubbles and arrows on a mind map that may look simple but reveal the entire destructive absurdity of an endlessly changing economy. Despite this density and because of it‘s clarity, OECONOMIA is one of the best documentaries about capitalism.