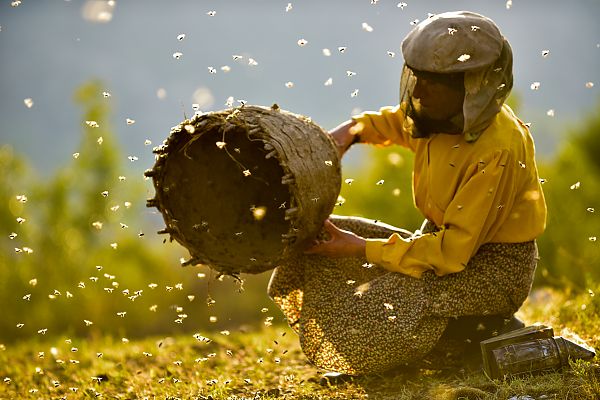 Haditze, a daughter and beekeeper in a remote Macedonian village, takes care of her mother and the bees that live in craggy rock faces, tree trunks, and ruins and make honey. A documentary.

A woman, alone in the Macedonian mountains. Alone with nature and the ruins of a deserted village. Alone with her sick mother. “I don‘t intend on dying,“ says the mother. Haditze, daughter and beekeeper, takes care of her mother and the wild bees that make honey in the craggy rocks, tree trunks, and ruins. On the way to the city a boy with a green mohawk sits behind her on the bus and the clerk in the market she is bartering with wears a Puma sweater. This is the 21st century. Garnier and Pantene hair colors, Haditze has to decide. Her nose is crooked, her teeth are bad, but she has charm and can bring her honey to a man. She walks through the market with a smile on her face. This is how they live, the bees, Haditze, and her mother, right until the neighbors come – nomads who build a sheet metal house with kids climbing on the roof. The children and animals bring a lot of noise, chaos, unrest, and change. HONEYLAND is a shocking, captivating documentary about life with nature. It‘s also about a life far away from technological comfort, with bad radio reception, and without medical care. It‘s hard to see what the two Macedonian directors Tamara Kotevska and Ljubomir Stefanov show, but you don‘t want to look away either. Western audiences fight with their privileges, with their disgust towards poverty, with the anger of why things are the way they are. But also with the urge to want to whitewash everything, saying empty phrases, like “what an impressive woman“ (even though it‘s true). This relentless film worth seeing doesn‘t make it easy on you and rightly so.