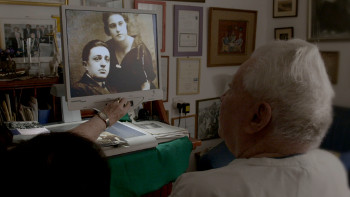 The Prince and the Dybbuk

A press photo of the film THE PRINCE AND THE DYBBUK is misleading. It‘s black and white and shows Italian star actress Sophia Loren in between two unknown men. On the right is Michał Waszyński, a Polish director and producer whose identity and past is the focus of the film. The film begins with a trip to Italy, of which there are many. In Rome a supposedly noble Hollywood producer is publically laid to rest with masses around him as we see in an old news report. A short snippet from the cheesy THE FALL OF THE ROMAN EMPIRE from 1964 (Director: Anthony Mann) fades in. Then we find ourselves in the present day, on the heel of many companions of Michał Waszyński and search for his grave together.

No press photo can represent the film or this person, we realize that quickly, and it‘s to the great credit of directing duo Elwira Niewiera and Piotr Rosolowski who let the documentary detective search become a dreamy essay film without a lot of commentary. The film is a nightmare for any TV editor that cheekily jumps between eras and truths, locations, languages, and film material. It‘s cinema, the cinephile who has to constantly watch TV on German screens can breathe a sight of relief. Things aren‘t explained to death with conventional talking heads. Instead there are visuals, hypotheses, and many open questions.

But back to square one: Michał Waszyński was actually called Moshe Waks, born in 1904 in what is the Ukraine today, made films. He made a dozen alone in Poland, was celebrated, was Jewish, made a film with the title THE DYBBUK. That was in 1937. The film is in Yiddish, it‘s about a Jewish ghost story and there‘s a homoerotic subtext going by the excerpts of the film. But wasn‘t Waks, excuse me, Waszyński, married to an old, French countess whose fortune he inherited? Was he openly gay or did that not happen because that wasn‘t done back in the day? Or because he converted to Catholicism? Allegedly?

Michał Waszyński continued to make films until 1945 as a member of the Polish army in the Soviet Union. After that he went to Italy and continued making films. In the 1950s he produced films in Spain and Italy. THE FALL OF THE ROMAN EMPIRE is probably his most expensive and known one. THE PRINCE AND THE DYBBUK takes a fascinating excursion to the shoot, reminiscing about the set pieces and locations with the help of extras and colleagues, looks for traces. Afterwards we travel along Côte-d'Azur, sit in the living room of family Waks in Israel and with old women in Kowel in the Ukraine as they sit on a park bench speculating about the background of a man that is looking at them in an old photograph.

There must have been a ton of material and numerous filmic possibilities in Niewiera and Rosolowski‘s unusual portrait. The fact that both of them weren‘t tempted to make a simple biography is their greatest achievement even though digging deeper in some sections would‘ve been beneficial. The fact that THE PRINCE AND THE DYBBUK puts the sensual cinematic form in the foreground, where it often isn‘t clear what the image is and who is speaking, composes a nice puzzle and make the film so wonderfully unusual.