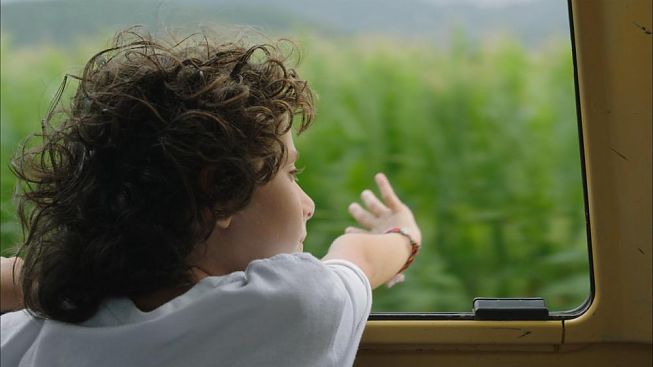 It‘s summer in Barcelona and 6 year old Frida is sad. She has to move to her relatives in the countryside after her mother‘s death.

After the death of her mother Frida‘s uncle (David Verdaguer) and his wife Marga (Bruna Cusí) take the 6 year old orphan (Laia Artigas) in. The two of them are young and loving, their small daughter Anna (Paula Robles) is immediately impressed by her new big “sister“ and doesn‘t leave her side. The summer moves along, the family‘s courtyard is in full bloom and the two girls play in the garden. But the situation has left a trace on Frida of course. Frida constantly undergoes medical tests and is afraid her mother infected her with a disease that was still very mysterious and stigmatized in the early 90s and leads to unease in the village as well.

ESTIU 1993 by Carla Simón premiered at the Berlinale in the children‘s section “Generation Kplus“ but didn‘t just win the big jury prize there, it also won the prize for the festival‘s best debut. Rightfully so. The story that is based on the old childhood memories of the Catalan director is made with impressive subtlety and compassion and is in no way filled with sentimental cliches. The young girls‘ acting is a testimony of Simóns talent in particular. It is a revelation to watch the two play so naturally and it would seem like a documentary if if weren‘t for the saturated colors and the sun-drenched images of summer. Laia Artigas plays the complex figure of Frida without many words, her grief, insecurity, and the desire for love and recognition are always felt and immensely moving – for adults surely more than for children.