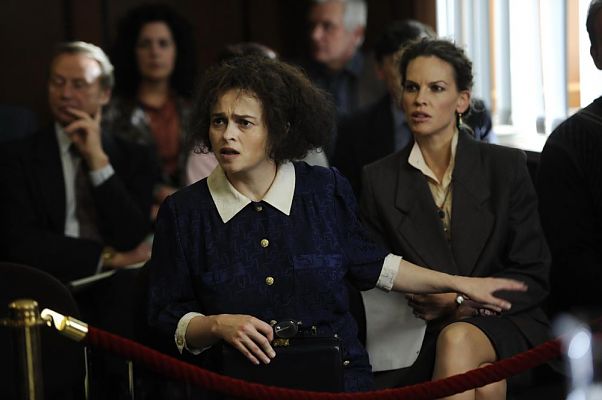 Mentally ill Eleanor Riese (Helena Bonham Carter) turns to a patient advocacy agency because she is prescribed high doses of neuroleptics against her will. Her lawyer Colette Hughes (Hilary Swank) fights for patient rights with her.

Hilary Swank doesn‘t appear in films very often. It‘s hard to remember her last big role. Her short, powerful appearance as a special agent in Steven Soderbergh‘s LOGAN LUCKY made us remember that we missed her. It‘s nice o see her in the starring role again. In 55 STEPS she splits the screen time with Helena Bonham Carter. Bonham Carter slips into the skin of chronic paranoid schizophrenic Eleanor Riese. We see how Riese is forced to take her medication against her will right at the beginning. It is 1985 and director Bille August (HOUSE OF THE SPIRITS) takes us to a color saturated San Francisco. Eleanor‘s face is also pale as she desperately turns to a patient advocacy agency and she‘s very lucky. Lawyer Colette Hughes (Swank) is deeply passionate about her job which she started practicing just 2 years ago. Before that Colette worked as a nurse wher she saw how psychiatrists were kicking patients. Colette and Eleanor advocate for the co-determination rights of patients when it comes to medication, It‘s a legal precedent and is about the rights of 150,000 people. Eleanor and Colette don‘t just appear as a team in court, they develop a wonderful symbiotic friendship played congenially by Swank and Bonham Carter. Director August refrains from too much pathos in the film and it almost becomes a feel-good movie. 55 STEPS is based on a real case: the real Eleanor died in 1991 when she was 47 from the side effects of her prescribed medication.