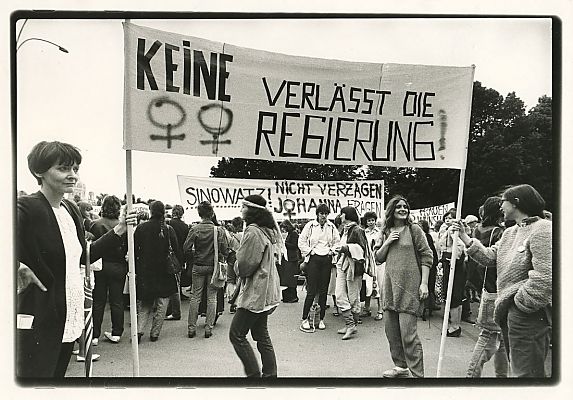 Austrian politician and feminist Johanna Dohnal hasn‘t entered the Austrian history books to this day. In this film, Sabine Derflinger commemorates the politician who died in 2010.

Austrian politician and feminist Johanna Dohnal hasn‘t entered the Austrian history books to this day. She is only known to those who call themselves feminist or to those who rubbed up against her visionary draft bills during her time as the state secretary and minister of women‘s affairs.

In this film, Sabine Derflinger commemorates the politician who died in 2010. With it she provides something that is still missing for women: a platform in which the demands for equality is really acknowledged. Derflinger sets archival footage from the 70s to the 90s and interviews with witnesses against the thoughtful exchanges of the youngest generation of Austrian feminists and shows how tough it is to establish to change income equality, unpaid labor laws, and gender roles to this day. Johanna Dohnal‘s diary entries and texts with historical references structure the film for those who don‘t know “The Dohnal,“ displaying the parameter of her influence from 1979 until her involuntary departure from office in 1995.

The charismatic politician could only fulfill a few items in her agenda, but she is a big reason why paternal leave caused a social rethink, women‘s shelters exist as safe spaces, and the sentence for marital changed. Derflinger focuses on her political life, but she also shows the private life of a calmly eloquent, empathetic woman. Dohnal was in a lesbian relationship, a mother, and believed in listening to other‘s opinions and entering a discourse.