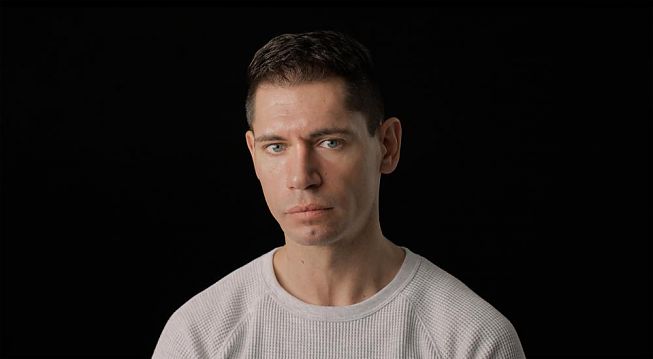 Nine alternating talking men. A questioner. A black background. It can‘t get more minimalist than this. The topic of the documentary? Male sexuality. But the cinematic experiment goes broad: #metoo comes to mind, the discourse around toxic masculinity, Alpha animals like Trump, Putin, buzzwords like the post-heroic era, gender debates, recent books titled “The Aggrieved Man. A Defense of a Discontinued Model.“ It‘s about rape fantasies, desires, the role of their own mother, projections, constellations during sex, weaknesses, hopes, loneliness, feminism vs masculinism (“I‘m for male liberation“), fears (“God, if my girlfriend hears this, she‘ll lose it“) and premature ejaculation. A lot of it sounds cliche. Here and there the guys lose themselves in platitudes, generalizations: that “males“ can‘t be as giving, but that “females“ are perfect in this. There are moving moments, like when the oldest interviewee talks about how long it has been since he‘s had sex and the few moments without talking, just feeling, thinking. Some thoughts goes beyond the topic of sex: do we need a new anger culture? Gender roles amongst homosexual men is also a topic. What can be heard again and again: how damn small the border is between free, sensual submission and abuse. Not every minute is enlightening, sometimes you wish for the inclusion of a female perspective (the director is also a man), but the minimalist experiment is definitely worthy of being seen and heard and not just by members of the “strong sex.“ It‘s up to the audience to decide how ironic the title is meant to be...