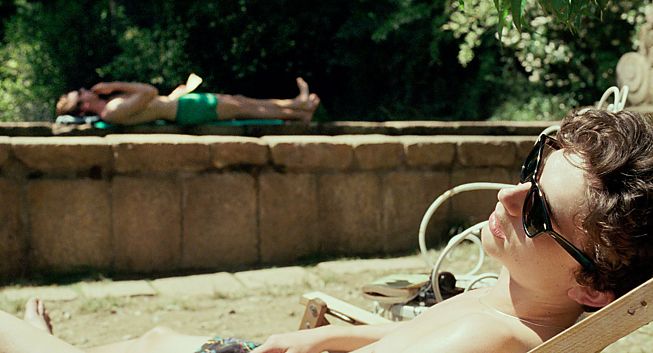 Call Me By Your Name

Italy, 1983. Young American Oliver spends his vacation with the Perlmans and their 17 year old son Elio. A summer with antique art and very contemporary desires.

“River flow is not that all things change. So we do not find it twice, however some things remain the same only through change“ writes Oliver (Armie Hammer) about Heracltius‘ “Panta rhei“ river in his notes. The young American spends the summer of 1983 with the Perlmans and their 17 year old son Elio (Timothée Chalamet) at their vacation house in Italy. He helps the father and archaeology professor Mr. Perlman (Michael Stuhlbarg) with his cataloguing in return.


When he takes him to the archaeological site of an Antique sculpture, Oliver gently strokes the bronze lips of the male figure which rises from the sky blue Lake Garda, just like Elio will do later on. When the almost 2 metre Armie Hammer‘s stretches his well-toned body in the water, director Luca Guadagnino (A BIGGER SPLASHES) transforms Oliver into a god-like statue. And when Mr. Perlman describes the timeless ambivalence of Praxiteles‘impossibly arches sculptures, he might as well be talking about the protagonists of the film when their naked bodies intertwine in bed, “as if they challenge one to desire them.“

Oliver begins to reshape the unwritten traditions of the Perlmans in a discrete way, dancing into Elio‘s heart at the open air disco to the Psychedelic Furs‘ “Love My Way,“ Oliver is treated like a long-lost son by the guest family, the girls in the Italian village fall for him, and he follows “the peach“ to its Latin origin during philological discussions. CALL ME BY YOUR NAME is about how the careful word constructions of Oliver‘s linguistic competence and Elio‘s literary education become insufficient. The first passes they make, wherein Elio‘s banal “later!“ fills him with insecurity, are clumsy, and before Oliver and Elio approach the unknown to the sounds of Sufjan Stevens, the two opposites butt heads. Physical passion and cautious emotional desire oppose and complete each other. The power relations keep changing in their relationship. Luca Guadagnino uses his soundtrack as an emotional ECG: the music accentuates the images for just a few seconds sometimes or ends abruptly with the next cut.

The Perlmans invite friends who fight over politics and Buñuel in one scene. The caretaker is lying on the grass and watches on amused. Elio gets a nosebleed and leaves the dinner table. Oliver follows him. Away from all the hectic, CALL ME BY YOUR NAME searches for beauty in which pain and happiness can complement and meld together like the names of the protagonists: “Call me by your name and I‘ll call you by mine.“

The interplay between happiness and pain is what drives Oliver‘s musings. In Terrence Malick‘s film KNIGHT OF CUPS a character says that happiness should be seen as a gift and so should suffering, because it connects you to something higher. Screenwriter James Ivory (THE REMAINS OF THE DAY) articulates this thought in CALL ME BY YOUR NAME in what is probably the best monologue about the pain of love: „If you feel pain, nurture it (….) But to feel nothing so as not to feel anything - what a waste!