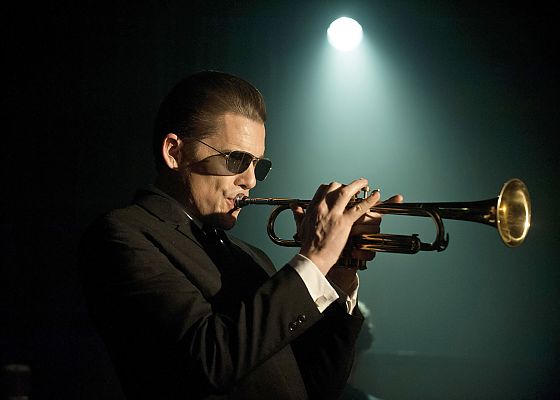 Born to Be Blue

BORN TO BE BLUE is a cinematic portrait of terrific jazz trumpeter Chet Baker, a humorous homage that doesn’t take itself too seriously. That also has to do with Ethan Hawke’s performance, who manages to approximate Baker without losing himself.

After MILES AHEAD (director and lead role: Don Cheadle), the unconvincing, gangster film-like Miles Davis biopic that only came out on DVD here, Canadian director Robert Budreau takes on another master of the jazz trumpet: Chet Baker. Budreau focuses on the turning point in a life with its fair share of crises: in the mid 60s it looks like Baker’s heroin addiction will be the end of him. Chet comes back with a strong woman at his side. The tired cliché of the suffering creative genius often found in biopics is thankfully missing here. BORN TO BE BLUE is a portrait and a homage filled with humor and doesn’t take itself too seriously. That has a lot to do with Ethan Hawke’s performance. Hawke manages to approximate Baker without losing himself. Hawke shows us the many faces of Chet Baker in amazingly shot scenes: from “King of Cool” over to the “James Dean of Jazz” and “the biggest junkie in the world.” Despite its lightness and self-mockery, the 97 minute film carries existential weight and culminates into a moving climax that has a lot to say about drug addiction. The film can proudly stand next to the great Baker doc LET’S GET LOST.