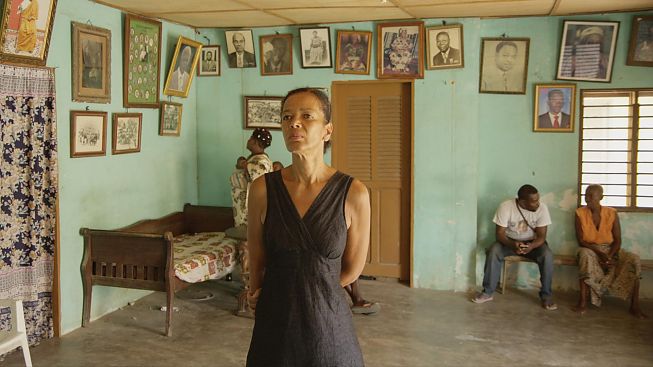 For a long time Ines Johnson-Spain didn't know why her skin was a different colour from her family's. In her documentary she searches for her roots and explores the history of racism in the GDR.

Ines Johnson-Spain is breaking the silence. It‘s an energy-sapping process. The wall had to come down 30 years ago and her mother had to be long dead before e she could sit here in a park with her stepfather. It is only then that she can ask him how he could accept her back then. And why no one in the family talked about her having a different skin color. Johnson-Spain cautiously opens up her childhood , lets you take part in it, in how it must‘ve been to always know that you were different but having no one tell you why. At some point the children opened their parent‘s permanently locked drawers and found documents that revealed that Ines‘ father came from Togo. He had an affair with Ines‘ mother, who was already married, when he was a guest student in the GDR. Along with the private marriage problems, the fact was that the friendship with African brother nations was emphasized to the outside, but in private, they didn‘t appreciate real, private connections. It was swept under the rug from all sides. It was the same when it came to the daily racism that didn‘t officially exist in the socialist country. It follows Ines like a shadow in her childhood, and she could only start to understand it as a teenager. The director also visits her African family again, the Johnsons, in Togo. She was there as a young girl. Now she‘s returning, to carry back the memory of her father as well. Johnson-Spain‘s trip is a plainly observational documentary (in the best sense) about her search for identity, turning intimate moments into something political. She builds a bridge for herself and all the other children from this era who actually weren‘t meant to exist.