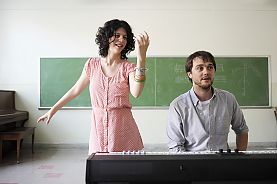 Martin and Gabrielle both suffer from Williams Syndrome and meet and fall in love at a choir practice. They have to defend their relationship in a society that denies love and sexual experience to those who are “different.”

The Young and Prodigious T.S. Spivet

Pierre Jeunet’s (AMÉLIE) adaptation of Reif Larsen’s novel of the same name tells the story of ten-year-old T.S. Spivet from Montana, who invented the perpetual motion machine, the Holy Grail of inventors. A film full of wonderful ideas.

Zurich in the 1950s. Röbi Rapp, a hairdresser and drag performer and Ernst Ostertag, a quiet teacher at a girl's school meet at a party of the secret gay organisation "The Circle". THE CIRCLE combines interviews with Rapp and Ostertag with a ...

MATCH ME follows three women and one man in their attempt to find a suitable partner via various matchmaking methods.

Qissa: The Tale of a Lonely Ghost

The beautiful Mehar already has three daughters. She expects her fourth child to also be a girl. But her patriarch of a husband, Umber Singh, wants a son and his name shall be Kanwar, young prince.

Tom at the Farm

Tom visits a remote farm in the countryside to attend his lovers' funeral. He is threatend by his lovers' brother Francis, but out of some sadomasochistic inclination, stays on. Queer horror from film "wunderklind" Xavier Dolan.

A young man roams forlornly through the streets of Almaty in eastern Kazakhstan. His landlady, the woman at the employment agency, his best friend – they all slam the door in his face. Nothing helps but to wait for “sunny days” to come.

HUMAN CAPITAL takes the novel of the same name by American author Stephen Amidon into the heart of high finance: northern Italy. Dino Ossola, a sleazy real-estate agent, hopes to profit from his daughter’s liaison with the son of a rich investment ...

A colorful transgender Christmas face on the streets of LA: Sin-Dee, just out of prison, is hunting down her cheating boyfriend Chester while Alexandra does her best to stop them from having an all too dramatic reunion.

Jakub is a competitive swimmer and together with his girlfriend Sylwia they live with his mother. But he is in love with Michał, with his high cheekbones and dark eyes, who is openly gay.

Alice, a tram driver in Zurich, lives for her family. When her husband Fran, an architect with excessive tendencies, falls in love with a man, she has to reassemble her life.

Claudia, a young woman working in a supermarket wants to be an actress. Martha is an ailing woman with four kids and is tired of being sick. A film about friendship and life’s challenges.

Paolo likes to spend most of his day in the village pub. He is a 40-year-old outsider, cynic, and misanthrope. However, everything changes when the 15-year-old Zoran appears on the scene looking for his uncle.