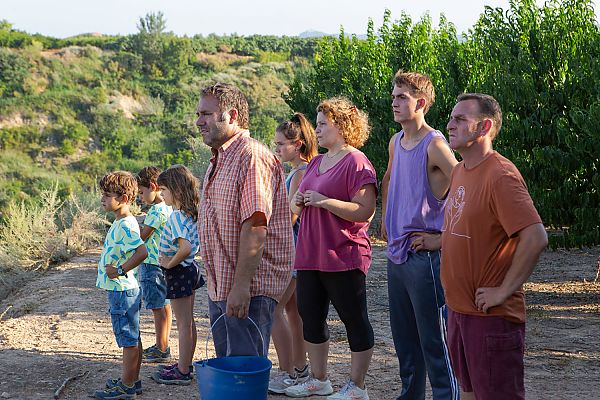 The Solé family has been cultivating a peach farm for generations. Day laborers gather the harvest. The Pinyol family, who own the property, wants to build a solar park on the grounds. The Berlinale Golden Bear winner.

The landscape surrounding the peach plantation is austere, but also clear and calm. Black workers pick fruit while the children of the white tenant farmer family run in zigzags across the plant rows. The Solé family has cultivated the piece of land in southern Catalonia for generations, but now they‘re plagued by existential fears: the Pinyol family, who owns the piece of land, wants to turn it into a solar plant and is pressuring farmer Quimet (Jordi Jujol Dolcet). Since the Solés don‘t have a written lease contract, they are vulnerable to the whims of the landowner. ALCARRÀS, which won the Golden Bear at the 2021 Berlinale, shows how this crisis impacts each member of the large family.

Solé‘s estate in the middle of the plantation is picturesque, but the plaster is peeling off. Their life here is simple and tough, their worries are tangible and understandable. Despite this, they are worlds apart from the day workers they collect from the city who have no guarantee that there will be work tomorrow. When the film is about the interdependency and the power discrepancy between the Solés and the Pinyols, it resonates. The stubborn Quimet refuses to accept the help of his wife Dolors (Anna Otin) and the children during the harvest at first and believes “the Blacks pick faster“ - while earning the same wage, of course.

Carla Simón‘s second feature film has an autobiographical background: the screenwriter and director from Barcelona spent a lot of her childhood in Alcarràs where her grandfather had a peach plantation. You can sense the loving attention the camera dedicates to the many facets of nature and the cultural landscape. The peach plants frame the characters, sometimes playfully with soft whispers, sometimes like impenetrable walls, like a labyrinth or a thick cover. Their leaves shine in countless green tones, bright and glittering in the sunshine, bleached and languid at dawn, dark and still at night.

You can sense that the film is especially focused on the perspective of the children and teens. They stroll through their green, sun-drenched world in a state of half-knowledge and desperately want to understand, help and no longer feel helpless. As a viewer, you also feel so close to them because they are the innocent victims in this mess made of power and exploitation. The really young ones are the only ones who are friendly and even close to the always presents Black workers who remain in the background. It is only in those kinds of scenes that we get close enough to the harvester to see his face and get a feel for his personality. ALCARRÀS lets us understand the segregation on the plantation with subtlety rather than explicitly – but only from a white perspective. There remains an empty space where the stories of the workers and their families could or should be there, if the film had also traced the racist colonial dimensions of its theme. 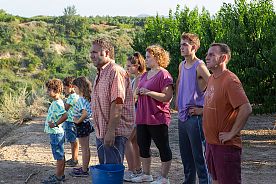 The Solé family has been cultivating a peach farm for generations. Day laborers gather the harvest. The Pinyol family, who own the property, wants to build a solar park on the grounds. The Berlinale Golden Bear winner.