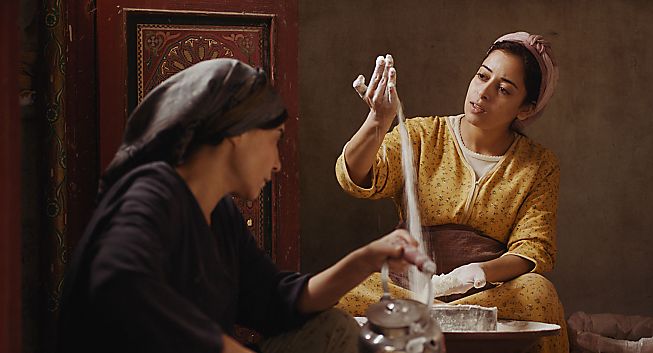 A young, heavily pregnant young woman wanders around the narrow streets of Casablanca looking for work and shelter. Samia is rejected everywhere, until she knocks on the door of single mom Abla.

A young, heavily pregnant young woman wanders around the narrow streets of Casablanca looking for work and shelter. Samia (Nisrin Erradi) is rejected everywhere, until she knocks on the door of single mom Abla (Lubna Azabal). Her cheerful, open daughter Warda (Douae Belkhouda) immedaitely wants to befriend Samia, but Abla is so full of anger and sadness that she doesn‘t want to let that happen. Many unasked questions about the past and future stand between the two women.

ADAM, the feature film debut of director and screenwriter Maryam Touzani, hits you in eyes and heart from its first moments. It‘s based on a real event: in a time when it was illegal to be pregnant and unmarried, Touzani‘s parents took in a pregnant woman so that she wouldn‘t have to give birth to her child on the street. The screenwriter created a simple yet big story from this experience about two women, Morrocan culture, and the oppressive powers of patriarchal structures. Virginie Surdej‘s calm yet experimental camera turns the film into a rich visual experience. The perspective on both women, their life, their work is fragmented, When baking, the camera focuses on the hands, when walking across the medina it‘s the back of the head, loosely covered by a headscarf. She takes a lot of time to study the expressive faces of both main actresses. Blurs and framings are important narrative techniques as well as the typical Moroccan architecture of Abla‘s house, her neighborhood. Even when it‘s sometimes painful, you‘re happy to know what will happen next, enjoying the moment when the sun rays surprisingly fall on Abla‘s kitchen. At the same time, there‘s an incredible amount of anger in ADAM – about how fate and the patriarchy torments women until all of the joy in their life is gone.