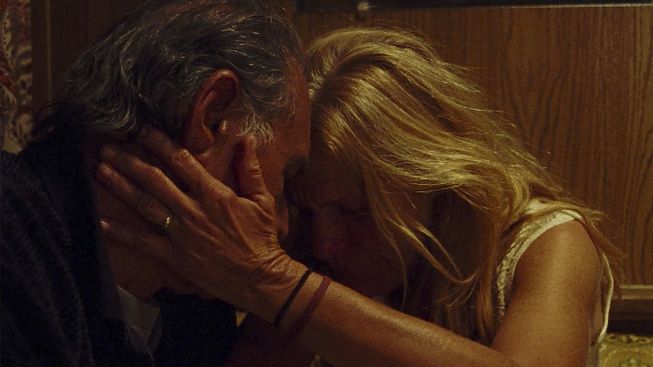 As we enter the second half of this abbreviated 10-day edition of the Berlinale, let’s shine a light on some noteworthy films playing in the Panorama and Forum sections — two areas where you’re guaranteed to find a healthy mix of personal, political, ambitious, and sometimes downright experimental. These sections aren’t exactly known for their comedies, but this year, one of the funniest movies at the festival, Alain Guiraudie’s VIENS JE T’AMMĖNE (NOBODY’S HERO) was the opening film for the Panorama section. The premise of the movie has to do with a bomb going off near a city monument, and whether or not is was a act of terrorism. This sets off an absurd comedy that delves into the fears and preoccupations of the white French male psyche. It’s not exactly pleasant place to be, and our main protagonist (played with wit and nuance by Jean-Charles Clichet) is indeed nobody’s idea of a hero, but the film excels at defying expectations as well as your own pre-judgements. By the end of the movie, even the most confounding characters are made painfully and recognizably human.

If you want a good double feature of comedies about racist and nationalistic paranoias, you’d do well to pair NOBODY’S HERO with KDYBY RADŠI HORELO (SOMEWHERE OVER THE CHEMTRAILS). This Czech film by Adam Rybanský is also in the Panorama section, and also follows a very similar plot. This time, the setting is a small Czech village, and the inciting incident involves a white van that crashes into an Easter celebration, wounding one of the townspeople. Immediately, and absurdly, the head of the volunteer fire department suspects that the runaway van was the work of foreign terrorists. A manhunt ensues. Lots of beers are imbibed. And while some villagers express their doubts at this terrorism theory, the voice of reason can only do so much against fear mongering and groupthink. It may not sound like the funniest of set-ups, but CHEMTRAILS is ultimately a sweet and kindhearted comedy that isn’t as edgy or progressive as NOBODY’S HERO but will likely put a smile on your face.

Speaking of sweet, this year’s Berlinale doesn’t get much sweeter than A LOVE SONG, an American film that’s also in the Panorama section and features two veteran character actors, Dale Dickey and Wes Studi. If their names don’t ring a bell, you’ll likely recognize their faces from over 30 years worth of movies. Yet, throughout all those various movie roles, these two actors have never once kissed another actor on screen. Maybe that’s a spoiler, but really, this is a movie that can’t be spoiled. It’s a simple, thoughtful, and often humorous romantic tearjerker involving two wonderful actors of a certain age. In other words, it’s the kind of movie that you rarely see these days. As an added bonus, writer/director Max Walker-Silverman films the movie like a micro-budget Wes Anderson movie, with pleasingly symmetrical framing, lots of effective inserts, and a meaningful soundtrack. If you’re like me, A LOVE SONG will make you long for the 1990s when the US was still making these kind of small, offbeat independent movies on the regular.

Another up-and-comer in American independent cinema is writer/director Tyler Taormina, whose HAPPER’S COMET (in the Forum section) is a remarkable follow-up to his 2019 debut feature HAM ON RYE. Like that previous film, HAPPER’S COMET is a mysterious study of small town American rituals. The biggest difference this time, is that HAPPER’S COMET is completely dialogue-free, relying instead on a sound design worthy of David Lynch, and finding meaning and narrative in gestures, movements, stillness and various diegetic sounds. HAM ON RYE was promising, and HAPPER’S COMET offers a compelling argument that Taormina is quickly mastering the language of film and is a major talent to keep your eye on.

Also in the Forum section is the newest from Travis Wilkerson, a filmmaker that’s been making fascinating documentaries and video collages for over ten years now. With NUCLEAR FAMILY, he’s co-directing with his wife, Erin Wilkerson, in a very personal documentary about a family trip wherein Travis, Erin and their two children drive around and visit some of America’s nuclear missile launch sites. Amazingly enough, the Wilkersons neatly tie together the proliferation of nuclear weapons in the US with the genocide of Native Americans. As the tagline for the movie reads: "Seize the land by gun. Turn the land into a gun. Point the gun at everybody’s head.” It’s a bold and strong statement of a film, but it also has a current of dark and angry humor to it that keeps it lively, engaging, and never boring. As someone who shares Wilkerson’s nuclear fears, and agrees that this is an important subject that we need to keep alive, I loved every minute of this one.