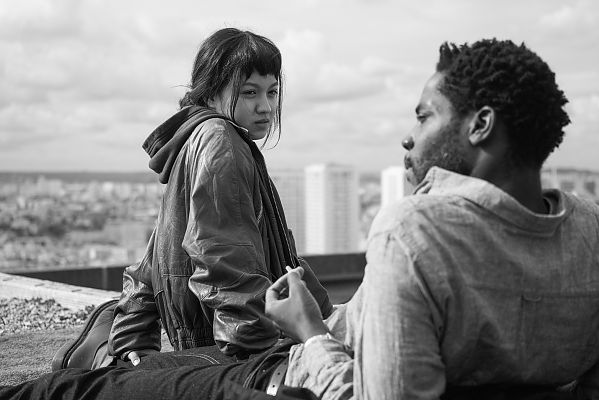 Based on the short stories of American comic illustrator Adrian Tomine, Jacque Audiard‘s film is about four young people in Paris, about sex, love, friendship, life plans and aimlessness.

PARIS, 13TH DISTRICT‘s original title is LES OLYMPIADES: a high-rise estate in Paris. The film THE PROPHET, shot in 2009 by Jacques Audriard, is named after a bus stop in Marseille. The director‘s new film unfurls with references LES ENFANTS DU PARADIS, a key work of French cinema history. Both conventional and new, Audriard interweaves places and their histories. A sieve in which the holes are the most important part, like the view from the building of a concrete block. The beautiful young couple are filmed in black and white. A divine couple in Olympia, naked, gentle, vulnerable, and strong. Later the Goddess shuffles along in the supermarket and sells films at a call center. Different living spaces in the city of Paris unfold and traverse along the people. It‘s about education, justice, real estate. The architecture often simulates static and accompanies the stories in this way. A Goddess studies law after years of abuse. Down, up, sex, the world, money: the cliche of the characters switching their cliches in different directions. Color pops in, like a disruption, a girl holds a flame. She congratulates “Baptiste,“ (from LES ENFANTS DU PARADIS): The girl stays on her sex side at first, but gives the yearning a name. Sure, it‘s sensual to see beautiful naked people in their vulnerability. Between walls, interwoven by rays of light. This complex structure seems both constructed and realistic. Like a successful skat game, a film, architecture as society. Olympus has fallen on Earth and we live inside it. The last spoken line is a love confession to a intercom on the way to a cemetery.