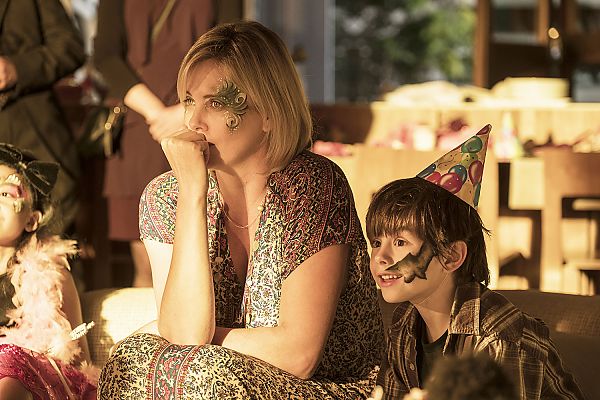 Marlo‘s rich brother Craig treats her to a “night nanny“ while she‘s expecting her third child, the freewheeling, beaming student who always finds a way to gets by.

After the award-winning JUNO and YOUNG ADULT, TULLY is the third collaboration between screenwriter Diablo Cody and director Jason Reitmann. TULLY is a bit like a sequel: all three films are about the personal relationship between youth and adulthood. TULLY is actually a comedy, but it keeps using camera positions and music that hint at a possible tip over to horror or a psychological drama. Marlo is at the center of the story, a personal manager who is on maternity leave and married to Drew, an IT guy who works a lot and doesn‘t talk much. Marlo is about to have her third child but is already overwhelmed by the two she has. Marlo‘s wealthy brother Craig treats her to a “night nanny“ who is supposed to take care of the baby while the parents sleep. The night nanny is called Tully and is a typical manic pixie dream girl with lots of energy, crop tops, and philosophical wisdoms. She doesn‘t rescue a grumpy boy here, but rather a not-so-young mother who is wrestling with her body and the dreams she has given up.

Charlize Theron plays the annoyed Marlo with a similar verve to when she got rid of scoundrels as Imperatora Furiosa in MAD MAX: FURY ROAD. TULLY shows female bodies in a way that is rarely seen in cinema: Marlo, sweaty and exhausted using her breast pump, Marlo and Tully in a punk bathroom trying to relieve Marlo‘s aching breasts. The contrast between the established Maro and the free-wheeling, beaming student Tully who always seems to get by incites a few sparks. Whether the reconcilement between childhood dreams and the reality of adult life is successful remains relatively open because of a diverse set of pitfalls that are built into the film.