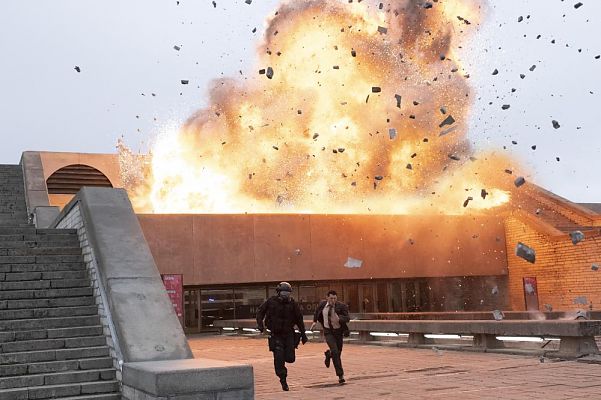 For the most part, TENET is a fun two-and-a-half hours of sci-fi spy-thriller immersion. For better and worse, it finds Nolan in pure entertainment mode while also going all-in on his chrono fetish.

No matter what year it is, anticipation will likely be high for a new Christopher Nolan movie. But since it’s 2020, and both the film industry and kinos everywhere are struggling to figure out how to survive amidst a pandemic, the frequently postponed TENET has been positioned as some sort of cinematic savior: the one movie with enough mystique and grandeur to drive people back into the kinos, COVIDs be damned.

So, now that TENET has finally arrived, is it worth it? There’s no doubt that this is indeed the kind of movie that benefits from a big screen. The bigger the better, really. While I caught a screening in the comfort of the cavernous International Kino, I’m tempted to see it again at the Delphi Filmpalast where they’re offering a rare 70mm presentation. As Nolan films are wont to do, it starts with a bold set piece and things just get bigger and twistier as it goes along. In other words, it delivers the goods – and in a cinematic, Kubrikian way that few mainstream directors achieve these days. (Credit should also go to Ludwig Göransson’s appropriately propulsive score and the stark shot-on-real-film (!) cinematography from frequent collaborator Hoyte van Hoytema.)

For the most part, TENET is a fun two-and-a-half hours of sci-fi spy-thriller immersion. For better and worse, it finds Nolan in pure entertainment mode while also going all-in on his chrono fetish. You can likely gauge how well you’ll appreciate TENET based on how much you enjoyed his last three non-Batman films. With INCEPTION, INTERSTELLAR and DUNKIRK, Nolan has been playing with the relativity of time and chronology. Dream time vs. awake time, surface time vs. outerspace time, and cutting between an hour-long story, a day-long story and a week-long story. TENET may be the apex of this ongoing experiment for Nolan, as he’s found a way to have action moving backwards and forwards at the same time.

Which leads me to try and sum up an un-sum-upable plot... Someone has found a way to reverse (or invert) an object’s entropy, which means that an inverted bullet would actually be moving backwards through time while everything else is moving forward. By the end of the movie, it’s not just bullets but people who have been inverted. And, of course, some maniacal bad guy named Sator (a Russian-accented Kenneth Branagh) wants to invert the whole planet and must be stopped. (Fun fact: like the title of the movie, the name “Sator” refers to a palindrome, in this case an ancient Latin variety carved into a stone square.) Adding a bit of heart and soul to the proceedings is Elizabeth Debicki (excellent here, as she was in Steve McQueen’s WIDOWS), who plays Kat, the captive wife that Sator is blackmailing and keeping from their child. Can our hero save the world and find a way to safely reunite Kat with her kid? That’s the plot in a nutshell. And for the most part, it’s a gas.

Of course there’s going to be an elaborate car chase sequence with some cars moving forward, others backward. Nevertheless, once this sequence began to unfold on an Estonian autobahn, I couldn’t help but feel giddy with excitement. Perhaps even more impressive is that Nolan has found a way to revisit certain sequences, so that what was previously backwards is now forwards and vice versa. This is especially fascinating in terms of a car chase. If you enjoy watching movies that elicit how’d-they-do-that wonderment, TENET is the kind of movie that keeps on giving.

Amidst all the inventive set pieces, there is a good deal of charm and mystique to the human characters that populate the movie as well. John David Washington, finally getting a suitable follow-up to his impressive turn in BLACKKKLANSMAN, is perfectly cast as the “The Protagonist.” While we’re all used to seeing James Bond suavely decked out in bespoke suits, the immaculate clothing that Washington wears in TENET feel important as well as enviable. Washington’s character already exudes Bondian levels of confidence and charm, but it’s the clothes that are going to help get him into all the high-security facilities and exclusive social circles he needs access to. Yes, it’s primarily an action movie, but there is a socio-political undercurrent to the film. Meanwhile, Robert Pattinson continues his winning streak of portraying charismatic odd-balls as Neil, the CIA contact who knows way more than he should about inverted entropy.

Without giving too much away, my main complaint is the ending. If you were disappointed when INCEPTION devolved into a snowbound military-style shoot-out, you may be doubly disappointed by TENET’s final act. Also, it seems Nolan didn’t care about the complaints people had about not being able to understand what Tom Hardy was saying behind his Bane mask, because there’s an inordinate amount of muffled dialogue coming from people wearing a variety of pie-hole coverings, starting with police riot gear and ending with oxygen masks. Perhaps, by the time the next Nolan movie rolls out, we’ll all be quite used to deciphering muffled mask-speak, but he could still help us out by bumping the dialogue up in the sound mix.

I wouldn’t risk your life, or your sense of taste and smell, to see TENET. But I will say that the kinos in Berlin have found a seating arrangement that makes you feel reasonably safe. I was happy to be back in one of my favorite kinos, watching a movie made by people who know how to make an impressively entertaining spectacle.