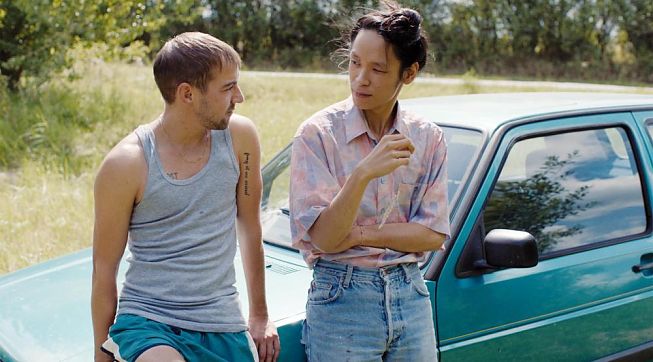 Gay trans man Markus lives in Uckermark, takes care of his grandmother, and dreams of a queer dream family in Berlin among the bathing lakes, the guesthouse, and the tree-lined avenues. But Markus stays.

Gay trans man Markus runs in the summer heat of Uckermark. But he isn‘t running away. He has two packed boxes waiting for him in the new building. But he still stays here. With his two grandmothers, who need his support. Markus is a caretaker, Markus jogs, Markus has sex dates and feeds birds, who seem as misplaced as Markus himself, though both move around in known terrain in the sandy Uckermark land. Between bathing lakes, guesthouses, and tree-lined avenues, Markus keeps dreaming of the queer dream family that he hopes to have in a future life in Berlin. But then Duc comes, who is here because of his birth family, like Markus. After the death of his father, Duc moved back from Berlin. It‘s beautiful in a different way, says Duc, as the two of them swim in one of the sub glacial lakes.

Love is a theme. Grandma Alma has Alzheimer‘s and her life partner grandma Sabine has to learn to let go of her love. Markus and Duc fall in love. An ending and a beginning. Yet NEUBAU isn‘t a romance. A “homeland film“ is written in the credits and outlines the core of this quiet film, which is reminiscent of the first wave of the Berlin school in its narrative technique. NEUBAU is not a conflict-heavy coming-of-age story or a typical east German story. NEUBAU follows Markus across Uckermark calmly and matter-of-factly, his life, his home, as well as Duc and Alma and Sabine. This matter-of-factness is the reason the Max Ophüls Jury gave the film the grand prize in 2020. Actor Tucké Royale, who won the prize for most socially-relevant film, wrote the screenplay and fills Markus with a magnetic energy that audiences embrace.