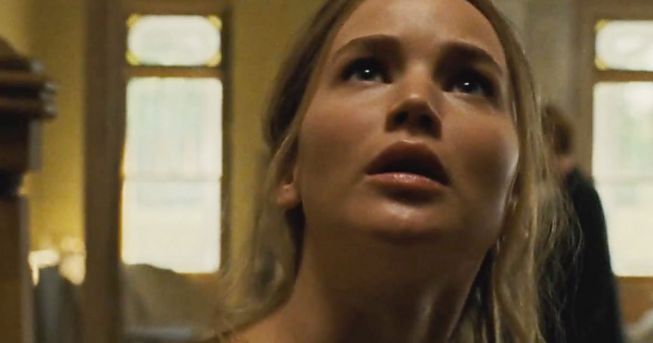 Those who watch Aronofsky’s films so they can have the world explained to them, which is what he wants, will be frustrated by his silly bombastic films. He attempts to make pop and art at the same time and it often ends up being very much on the nose. Sometimes it goes more or less unnoticed, like in BLACK SWAN which mixes high culture kitsch into the pop soup while other times the esoteric vapidity of Aronofsky’s pomp is obvious like in the world tree drama THE FOUNTAIN.

mother! is as useless as a drama about artistic and existential creation and male and female world perspectives as Aronofsky’s other forays into pseudo-depth. But if you leave the esoteric silliness aside, what remains is a very beautiful, lively, funny, and shocking film about the violation of personal space.

A young woman (Jennifer Lawrence) is renovating an old house which seems to encompass her entire world. She touches the wall and feels something alive, perhaps it’s her soul that is imprinted in the rooms that she has created. Her significantly older husband (Javier Bardem) is a great poet who is in writer’s block. The catastrophe begins when the doorbell rings and a stranger (Ed Harris) is at the door. Without even asking his wife, the man asks the stranger, who believed the house was a bed and breakfast and has no other place to stay, to come in. The stranger is immediately invasive, makes pushy, sexist comments about the woman, smokes without asking for permission, and the situation escalates from here. The next day the stranger’s wife (Michelle Pfeiffer) barges in and immediately asks about the couple’s sex life, criticizes the woman’s underwear, invades all private spaces, and touches everything. The stranger and his wife stage an increasingly violent drama that keeps bringing more characters into the house. We see this all from the woman’s perspective who experiences the entire drama as a direct physical attack on the world she has created, on her soul. Sometimes, when she can’t bear it anymore, the screen vibrates. It’s a fantastic cinematic experience, especially for introverted people with social phobias who prefer taking in people in small doses with a protective distance.