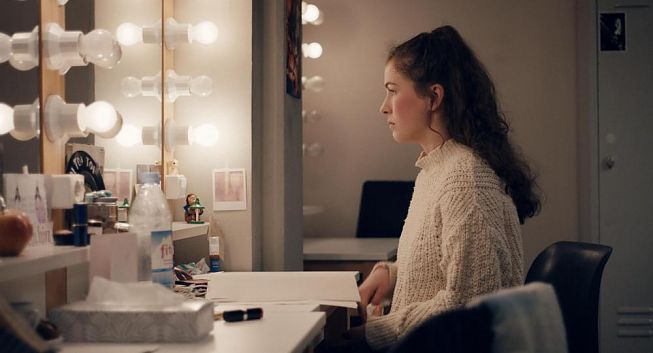 Ava moves back in with her mother and her new boyfriend after university. Since she can‘t find a job, she interns at a theater where she meets actor Jonas.

In the next months an entire series of films by young German filmmakers will be released that would be unthinkable without the #MeToo tsunami after the Weinstein scandal. Film with women of almost all ages and almost most social classes who just want out: out of their circumstances, relationships, statuses, addictions, and their (own) expectations.

One of the strongest films of this collection of films is Sophia Kluge‘s GOLDEN TWENTIES, a striking coming-of-age story about Ava (Hentriette Confurius), a woman in her mid twenties who lands back at her mom‘s place after studying abroad, looking at her old environment and future with the spirit of someone who is still abroad. A bit like Tom Schilling 7 years ago in OH BOY, Ava is also lost and saunters around Berlin in a dreamy and transcendentally assured way. She isn‘t really standing on the edge of an abyss, even though her life contains unimagined darkness.

The smart criticisms about our present are more trenchant and sharp than they are in Jan-Ole Gerster‘s OH BOY. Kluge ruthlessly shows the artifical feelings of our daily lives, the daily masquerades, the private and institutional lies, even and perhaps especially in the theater world. In precise, wonderfully melancholic moments, Kluge even goes one step further with her spectacular protagonist and looks at her generation‘s the frustrated search for a focus and reliable roles with an almost lyrical consolidation.