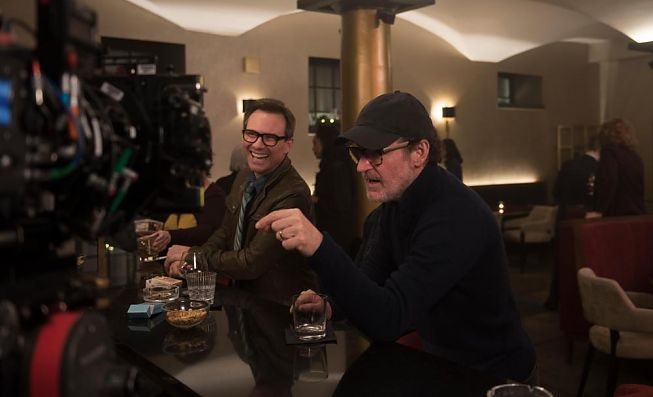 Glenn Close plays Joan, the wife of author Joe Castelman, who has just found out that he received the literary Nobel Prize. On the way to the award ceremony Joan‘s longstanding suppressed feelings and repressed memories erupt.

The platitude that behind every successful man stands a strong woman that supports him is not only often true, it‘s also pretty poisonous praise – THE WIFE downright relishes in exposing that. “Behind every successful woman stand three men who want to hold her back,“ is what politician Waltraud Schoppe amended over 30 years ago. But Björn Runges adaption of the eponymous bestseller novel by Meg Wolitzer isn‘t so simple to break down.

The film follows married couple Joan (Glenn Close) and Joe Castleman (Jonathan Pryce) in 1993 when they discover that writer Joe will get the Nobel Prize in Literature. The early morning call from the academy president and the following joyful dance in bed causes Joan to get a strange expression on her face that already raises the suspicion that somewhere behind the smiling facade a deep grievance and disappointment is nested in there. What the shadow that hangs over the celebration of the highlight of her partner‘s career is, which she also worked towards for years as the self-proclaimed “kingmaker,“ remains unclear at first.

But during the Stockholm trip to the showy award ceremony the suppressed feelings and repressed memories gradually come to light and can‘t be stopped, even by a controlling personality like Joan‘s. Her seemingly genius husband and former English professor doesn‘t just prove to be highly insensitive when it comes to treating his wife respectfully in public, angry and insulting when assessing the writing talents of their son David (Max Irons), and frequently unfaithful, he is also incredibly insecure when asked about the names of the protagonists of his greatest literary successes.

Flashbacks gradually reveal the truth. They show a talented student writer, young Joan (played by Glenn Close‘s daughter Annie Clarke) in a romantic relationship with her married mentor and later husband Joe (Harry Lloyd) and the barely existing prospects for recognition and commercial success within the patriarchal structures of the western literary industry in the 1950s. Joe‘s wannabe biographer Nathaniel Bone (Christian Slater), a very unpleasant and pushy stalker journalist, is also after the suspected secret and follows the Castlemans to Sweden.

THE WIFE is about a seemingly enlightened society and its hypocritical, if not delusional, fixation on the belief in the male genius. It is mainly Glenn Close‘s excellent facial expressions that make this adaptation into a real event. She has brilliant colleagues by her side, of course, but the show truly belongs to her. The overwhelming subtlety in which the actress – who has been ignored by the Academy Awards so far – suggests and sounds out the inner life of a character who tries to keep it together at all times is a marvel.