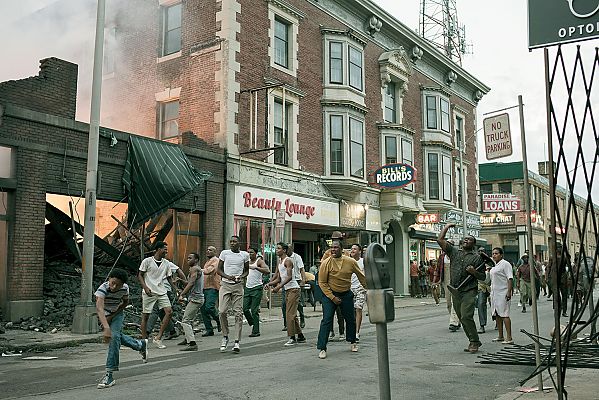 Detroit, 1967. Decades of discrimination turn into angry street riots. When shots from the Algiers Hotel are reported, the police step in and bullies a group of predominantly African-American hotel guests. Several people are shot.

In the summer of 1967 a police troop broke up a celebration for two Vietnam vets in an illegal bar. Over 80 people were arrested and stones were thrown on the street. The violence escalated and the decade-long discrimination lurking just beneath the surface erupted into street riots that lasted days. The mostly African-American Detroit residents fought against the mostly white policemen, the national guard, and the army. During the “12th Street Riot“ shops were looted, buildings were set on fire, and street blockades were erected. 24 African-Americans were shot by security forces and countless citizens were abused and harrassed by the authorities. Things got especially brutal in the “Algiers Motel Incident“ which Kathryn Bigelow reconstructs in detail in her historical thriller. The young members of up-and-coming band “The Dramatics“ fled to the motel after their tour bus broke down. DETROIT depicts the events of that night in detail: the boys meeting two white female students, the party being broken up, and the police storming into the motel, and especially how the band members, the young women, and the other motel guests were terrorized by the police. Three men were shot. The torture seems to almost be happening in real time, making the obvious contempt with which the white policemen treated their captives harrowingly clear.

DETROIT is an ensemble film that is mostly about group dynamics. Who starts the violence, how it escalates, who joins in, who can stop it but doesn‘t. Three people are nonetheless memorable: policeman Krauss (Will Poulter), who seems to welcome the opportunity for violence. The serious and talented young singer Larry (Algee Smith), who doesn‘t want to have a career playing in front of a white audience after the experience, and most of all the African-American security man Dismukes (John Boyega), who is stuck between two sides, on one hand he‘s part of the establishment, but on the other hand he doesn‘t have enough authority to prevent the heinous behavior.