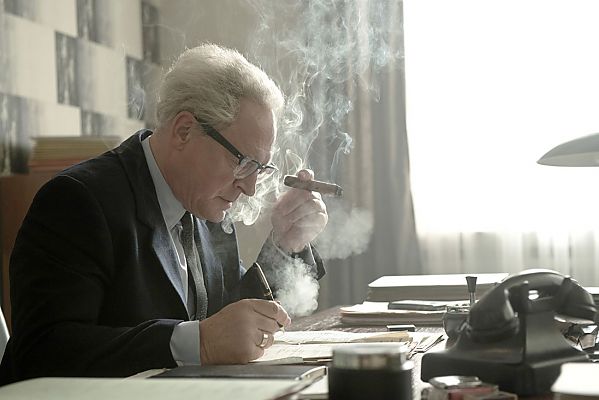 The People vs Fritz Bauer

THE PEOPLE VS FRITZ BAUER explores an episode in the life of Fritz Bauer, the Federal Prosecutor General, who was instrumental in the arrest and trial of Adolf Eichmann and who later initiated the Auschwitz trials.

Burghart Klaußner would be a shoo-in for the best actor Oscar if DER STAAT GEGEN FRITZ BAUER were in English. Klaußner seamlessly steps into the role of the small, grumpy, and tough attorney general with the kind of body language, posture, and speaking voice that make it impossible to think he could ever be anyone but Fritz Bauer. You can virtually smell the tobacco on his clothes and fingernails and get a clear idea of the untold backstory that make up his complex personality by his well-thought-out lines of argumentation and his rattling authoratitive voice so emblematic of the 50s.

Fritz Bauer, the lawyer who enforced the first Auschwitz trials in the early 60s and broke the wall of silence that Germany erected around its Nazi past, is currently being rediscovered. Christian Petzold dedicated his neo noir post-war drama PHOENIX to him. Guilio Ricciarellis’ IM LABYRINTH DES SCHWEIGENS was inspired by him and is about a young man who investigates a former concentration camp guard. Director Lars Kraume (MEINE SCHWESTERN, DIE KOMMENDEN TAGE) fictionalizes an event in Fritz Bauer’s life that occurred before the Auschwitz trials but came out only after his death: his involvement in tracking down and sentencing Adolf Eichmann.

Germany, 1957. The Swabian lawyer and social democrat Fritz Bauer, the son of Jewish parents, returns to Germany after persecution and exile. He returns to his job as a lawyer and makes himself unpopular by going after Nazis in his Hessian hometown. Bauer is a major treat to the old system: he is not afraid of the old guard and doesn’t care if he makes enemies along the way. He was known to say that when he stepped out of his office he entered enemy territory. When he gets a lead on Adolf Eichmann’s hiding place he is wary of telling the authorities. He only lets his old comrades in on it and contacts the Mossad. He also gets help from the young and enthusiastic Karl Angermann, a lawyer working for him.

DER STAAT GEGEN FRITZ BAUER is a smartly constructed biopic, an intimate political thriller, a homage, and also a bit of a buddy movie. The film shows how trust is built between the laconic bag of bones Bauer and the young, industrious Angermann in a restrained way. They are both outsiders in the stifling Adenauer era as well as serving as the hope for a better future.