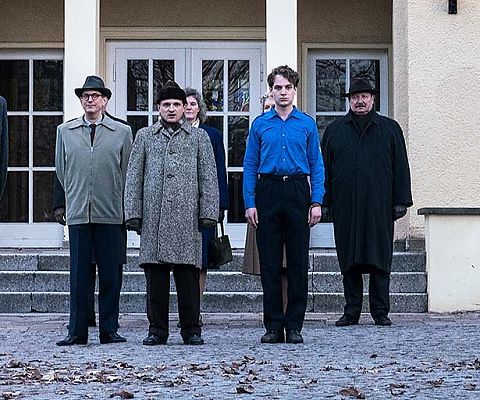 In 1956 a 12 grade class in the GDR has a minute of silence for the demonstrators who were killed during the Hungarian Uprising. The spontaneous act has unforeseen consequences.

After his smart post-war drama DER STAAT GEGEN FRITZ BAUER about the Hessian attorney general that pushed the processing of Nazi crimes and the legal pursuit of Nazi perpetrators in the FRG, Lars Kraume is now dedicating his post-war frame of mind to the GDR. DAS SCHWEIGENDE KLASSENZIMMER is set in 1956. The wall hasn‘t been built yet and the Eastern Block has just had a short phase of liberalization that abruptly ended with the quashing of the Hungarian Uprising. In Storkow (in the film it‘s Eisenhüttenstadt) a group of high schoolers decide to have a minute of silence for the dead Hungarians. It‘s a spontaneous act that has unforeseen consequences. When the principle finds out about the act of protest, he makes the entire class choose: either the ringleader comes forward or the class won‘t be taking their finals. While the students remain silent, there is drama at home. There‘s the broken steel worker (Ronald Zehrfeld) who doesn‘t want to watch his son jeopardize his future, there‘s the son of resistance heroes who are contemptuous of the counter revolutionaries, and there‘s the functionary who fears for his own future. Kraume uses the story that is based on real events to sketch out the different mindesets after the war in the GDR, to broach the issue of East and West media propaganda, and to ask what a moral/political position is worth. FRITZ BAUER was similarly didactic, but it had the phenomenal Burghardt Klaußner at its center. DAS SCHWEIGENDE KLASSENZIMMER is simpler in comparison, but offers an interesting entry into the complex conflict situation in post-war Germany.