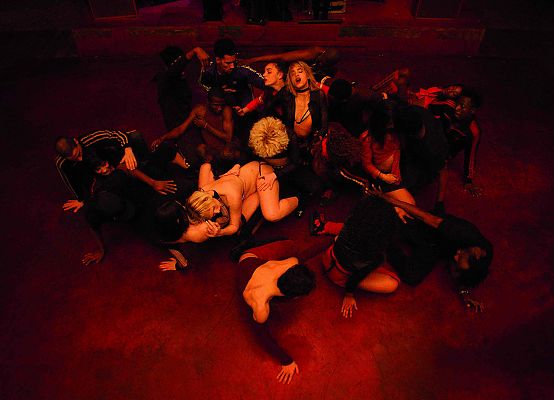 To a Berlin-based audience who may know a thing or two about the art of partying, Gaspar Noé’s CLIMAX – a film evoking a dance rehearsal, party mayhem episode from 1996 in France – might appear more twee than the last Gegen party. In its attempt to look back at the ‘90s for the seeds of dystopian hedonism, CLIMAX misses the complexity and the richness of the dance floor as an empowering site for bodily experimentation and expanded consciousness (that’s right, LSD does not always kill you!), opting instead for a corporate-clean, coked-up, Hobbesian depiction of youth culture. The opening sequences begin promisingly, with enigmatic, tantalizing tableaux: a woman writhing and bleeding in the neon-white snow – an ambiguous premonition for the euphoric void of the dance floor, followed by a wonderfully oblique transition to a grainy TV, flickering with analogue splendor: a mysterious interviewer/prospective employer questions young dancers from a diverse demographic about their views on dance and life. This crackling TV set is surrounded by a shrine of piled-up books and VHS tapes, pointers and tributes, perhaps, to Noé’s wide ‘nihilistic’ influences – from Kenneth Anger, Dario Argento, to Franz Kafka and Emil Cioran. Such promising influences are unfortunately left far behind, and only their skeletal, watered-down tributes remain. In the film’s attempt to persuade us of the hedonism of the dance floor and the dark side of youth culture, unspeakable violence ensues. For CLIMAX performs a shallow, social experiment: what if we leave the youth, with their versatile, and languid bodies to their own devices? What happens when we mix acid-laced Sangria and Cocaine together? Everything and nothing. Everything bloody, murderous, and sadistic happens. Nothing happens beyond its own sensationalistic aesthetic; only a loud, clamoring, cinematic thud remains. At its best, the film’s zombie-splatter moments redeem it from its own moralistic framework. As a proud descendant of the tail end of the late-‘90s UK-rave scene, where dance culture was venerated as a political and utopian project, I was excited by the promise of Noé’s subject matter. The list of musical artists gracing the film’s soundtrack only bolstered my enthusiasm: Aphex Twin, Cosey Fanni Tutti, Soft Cell. The dance floor was a devotional site of worship, where ideas, bodies, and ecstatic sensations were exchanged. What am I to make of Noé’s paternalistic portrait of the partying of youth? Noé’s upside-down camera shots do not convince me that losing control is demonic. Nor do the screaming, anguished (mostly female) bodies, or the sobering glare of neon strobes. For I am beginning to grow weary of Papa-petit-bourgeois filmmakers explaining to me the darkness of the human spirit. We need another cinematic vision of what it means to party. Roll over Gaspar.