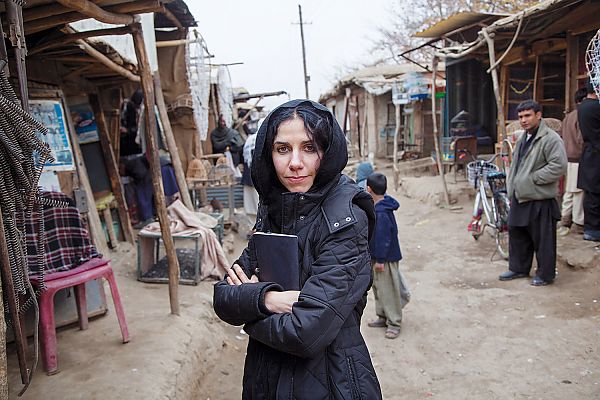 Documenting a unique recording and the travels that inspired it.

A DOG CALLED MONEY documents the recording of PJ Harvey’s 2016 album The Hope Six Demolition Project, but it’s the album’s backstory that makes up the lion’s share of the film: prior to recording, Harvey traveled to Afghanistan, Kosovo, and impoverished parts of Washington, D.C. She was accompanied on her travels by filmmaker Seamus Murphy, who in addition to documenting her journeys picked up his own footage along the way, ranging from street scenes to impromptu performances to still profile shots of people. Harvey’s subsequent album documented these travels, with the film serving as a sort of meta-document of the entire process. The whole setup is more than a bit circular and self-referential, but fortunately it’s handled with a breeziness that keeps the momentum from flagging.

The film’s center of gravity is the temporary studio built in London specially for the purpose of recording the album. The studio’s most unique feature and raison d'être is the inclusion of a one-way glass window, which allowed a steady stream of visitors to watch the recording process without being seen by the musicians. This ever-present, mostly unseen audience adds another layer of complexity and self-referentialism to the film, and alongside Murphy’s ever-present camera, the performance never really stops – to the point that even “candid” moments of between-song goofing around convey a feeling of sober professionalism.

The discrepancy between the bespoke London recording studio and the impoverished, war-torn locales that inspired the songs is an ever-present tension. Harvey offhandedly acknowledges this in early on: “These were country people,” she says, making her way through an abandoned Kosovo house, “and I’m stepping on their things with my expensive leather sandals.” This acknowledgement is refreshing, and takes the immediate sting away from what could otherwise be a cringeworthy exercise in disaster-tourism-as-art. It also helps that the songs themselves – which serve as the intermediary between the disparate locales and trajectories of the film – sound fantastic. The production (a co-effort of Flood and John Parish, both of whom appear throughout the film) finds the perfect spot between art-rock grit and cleaner folk-style instrumentations, helped along immeasurably by Harvey’s singular voice and the formidable musicianship of her band.

Murphy has extensive experience in Afghanistan as both a photographer and filmmaker (the country was the subject of his 2011 film A DARKNESS VISIBLE). His footage of the country ranges from hectic street scenes to dire portrayals of poverty to stunning, near-surreal panoramas: a tank graveyard framed by snowy mountain peaks, or a bombed-out building with its undamaged tiled facade still standing. Next to this (and some comparably beautiful scenes in the churches and hills around Kosovo), the Washington footage feels especially bleak in its brick-and-concrete dullness.

All in all, the film is somewhat frustrating: while Murphy as a filmmaker seems fearless enough to find strangeness and beauty all over the world, it’s ultimately a one-way trip from the disparate poverty-stricken locations to the isolated world of the recording studio. The film and songs document these locations admirably, but with each return to the studio, the hope of ever getting any real insight into Harvey’s creative process dwindles, and eventually the viewer ends up feeling like another of the anonymous studio visitors, stuck on the wrong side of the glass. A DOG CALLED MONEY is frequently beautiful and sometimes haunting, but ultimately it doesn’t go far enough in breaking down the walls between creator and audience.