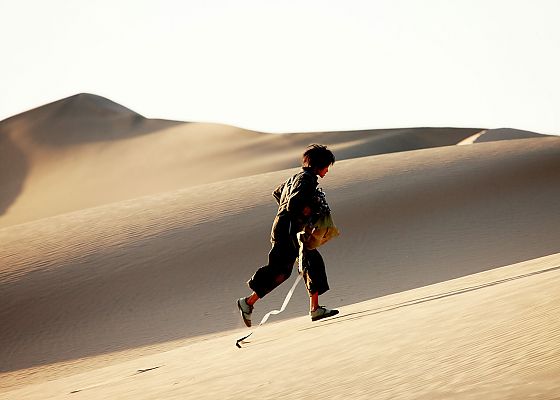 ONE SECOND is infused with a warm-hearted, luminous love for analog cinema. The linear story of Tramp and the orphan and cinema is reminiscent of classic narratives from the 30s and 40s.

A film canister opens during shipping and a film roll lands in the desert and gets knotted together. A catastrophe. Without this roll, which contains the current newsreel, the screening of the propaganda film “Heroic Daughters and Sons“ (1964) is endangered which the entire village is looking forward to. Zhang Yimou‘s ONE SECOND, set in the 1970s towards the end of the cultural revolution, shows how the collective manages to make the film work under the guidance of the traveling projectionist Mr. Movie (Fan Wei). Initially, the film reel is untangled, spaciously hung up on linens, cleaned with distilled water and gently fanned dry before it is then, very carefully, reeled up again.

It isn‘t just the villagers who are eagerly waiting for the film roll to be reassembled, but also a nameless refugee (Zhang Yi) and orphan Liu (Liu Haocun), two marginalized people who become a mismatched couple over the course of the film in a way that‘s reminiscent of the tragicomic duos of the silent era. He fled from a labor camp because someone told him that his daughter can be seen in the film. She is after the film material in order to make a lampshade out of the sought-after material to replace a lamp that her little brother broke by accident. The two try to get rid of the other at first to get to the film roll, but they overcome their deep-seated mistrust and become allies.

ONE SECOND is infused with a warm-hearted, luminous love for analog cinema – meaning both the collective experience of the screening and the physical state of the film. The linear story of the tramp and the orphan and the cinema recalls the classic narrative cinema of the 30s and 40s. The longer you watch the film, the more complex, ambivalent and interesting the characters and levels of meaning become. The collective in the cinema dreams of propaganda together, if you look more closely,

ONE SECOND was supposed to screen at the 2019 Berlinale and was withdrawn “due to technical difficulties“ at the last minute. Zhang Yimou had to edit out a minute. Whatever that minute may have contained: the understated film that came out seems perfect.