The pen is mightier than the sword, says one. A picture is worth a thousand words, says the other. Words vs. pictures; pictures vs. words –an unusual rivalry between two extraordinary people who couldn’t be more different. So it seems. Jack Marcus is English teacher at a New England prep school. His students adore the lauded poet for his unconventional teaching style. But his style isn’t as welcomed by his fellow faculty members. The aloof Dina Delsanto, the new art teacher for his class, reacts coldly to his advances. When Delsanto tells her class that painting can express things beyond words, Jack calls for a school-wide competition of words and pictures. Their rivalry soon turns into an attraction, but Jack’s alcoholism and self-loathing prove to be a challenge. Dina und Jack’s verbal skirmishes, enthusiastically played by Juliette Binoche and Clive Owen, are reminiscent of romantic screwball comedies such as HARRY & SALLY and SLEEPING IN SEATTLE. Director Fred Schepisi (THE RUSSIA HOUSE, ROXANNE) creates a potpourri of comedy and drama without losing the harmony between lightness and seriousness. Impressive are Dina’s large-scale canvas abstract paintings, which Binoche painted herself. 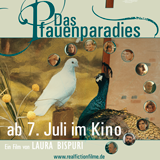