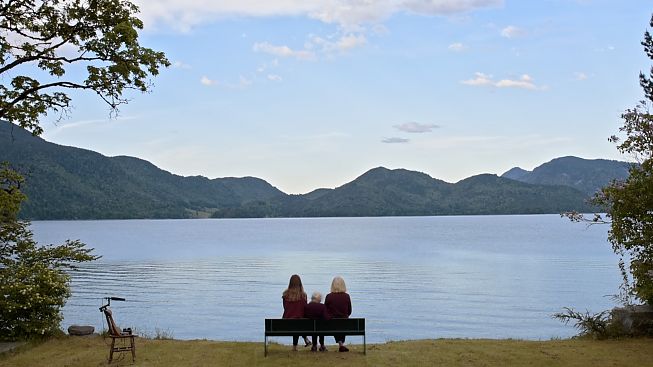 Janna Ji Wonder‘s documentary about her own family takes her from Bavaria to the US, to Rainer Langhan‘s commune, and back to Walchensee.

The Walchensee, one of the deepest alpine lakes in Germany, is south of Munich and sets the stage of an unusual family story that is primarily written by women. It begins with proud great grandmother Apa, who opened a cafe by Walchensee with her husband after the death of her daughter. Grandmother Norma managed the cafe alone, in order to not be reliant on a man, and reaches the age of 104. Norma‘s daughter Anna, a photographer, travels across the US and Mexico with her sister Frauke in the 60s with a dulcimer and a guitar, lives in Indian ashrams, and later co-founds the “harem“ of Rainer Langhan. Anna‘s daughter, director and screenwrier Johanna aka Janna Ji Wonders, is born in a hippie spot in California and shoots videos asking family members questions from a young age. WALCHENSEE FOREVER is a collage made out of old and new film footage, photos, letters, diary entries, and newspaper articles involving five generations. It is a family chronicle spanning 100 years, and a moving filmic journey through time. Norma and Anna Werner, Rainer Langhan, and Jutta Winkelman, who died in 2017, remember Frauke Werner, her early death, and the beginnings of the Harem.

Wonders displays the lives of the women in her family against the backdrop of contemporary history and casually highlights how the role of women and the understanding of family and home has changed over the decades. The eponymous Walchensee serves as a safe haven for the very different women portrayed in the film. During the shoot the director became a mother to a daughter herself – the history of women from Walchensee continues.