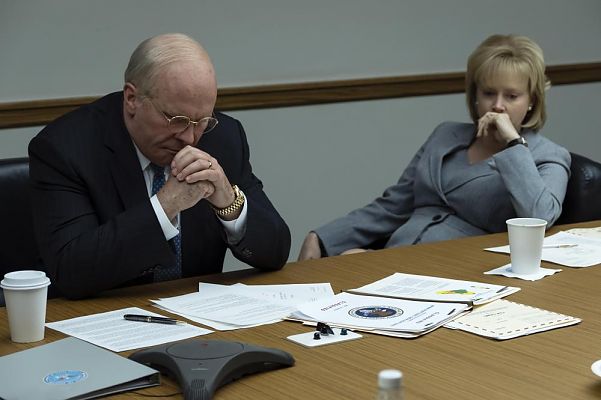 Dick Cheney (Christian Bale) was the most powerful vice president in the history of the US. He instigated a war based on falsified evidence and reinstated torture, calling it “enhanced interrogation.“ Adam McKay turns Cheney‘s story into a ...

Directed by Adam McKay, VICE is an entertaining, though unfocussed satirical biopic of American Vice President Dick Cheney. VICE reunites McKay with Christian Bale and Steve Carrell, two of his lead actors from his award-winning 2015 film THE BIG SHORT, and Bale’s stunning central performance as Cheney carries the film.

According to McKay, the answer to what drove Cheney, the most enigmatic and bureaucratic of modern politicians, is simple: the pursuit of power. Beyond that, in the film’s opening sequence, Cheney’s wife Lynne, played superbly by Amy Adams, threatens to leave her errant young husband unless he cleans up and becomes a man worthy of her affection. This motivation, whilst sufficient for a straightforward biopic, sadly does nothing to explain the political and ideological decisions Cheney made throughout his career, which the film is ultimately more interested in.

Essentially, VICE has two modes that never fully reconcile. Firstly, a straightforward biopic that rests heavily on Bale’s performance, and secondly, an anarchic political satire that seeks to nail Cheney and the Bush administration for their various crimes and misdemeanours. In attempting to make his case, McKay recycles many of the devices that he used to great effect in THE BIG SHORT. However, the film strays too far from the frame of a biopic to make its meta-cinematic tricks surprising or subversive. This lack of constraint makes the addresses to camera, intertitles, and laboured explanations of the Bush administration’s policies feel arbitrary, especially when coupled with the blackhole at the heart of Cheney as a dramatic character.

Cheney’s rise, charting four decades of American history, provides the narrative impetus, and it is an exhilarating ascent – though one that doesn’t conclude with a fall. What little sympathy there is in the film is reserved for Cheney’s daughter Mary (Allison Pill), who is ultimately a victim of her father’s Machiavellian desire for a lasting political dynasty. Clearly, the tragedy of the film is that Cheney got away with it all, as its closing and damning intertitles suggest.

VICE is a good film carried by a great central performance, though one wishes the filmmakers had done more to get under the skin of a politician who did so much damage to the United States and the world at large. As VICE‘s opening disclaimer states, the story “as true as it can be given that Dick Cheney is known as one of the most secretive leaders in recent history. But we did our fucking best.” Ultimately, the film aspires to the truth, but acknowledges that it can’t quite get there.