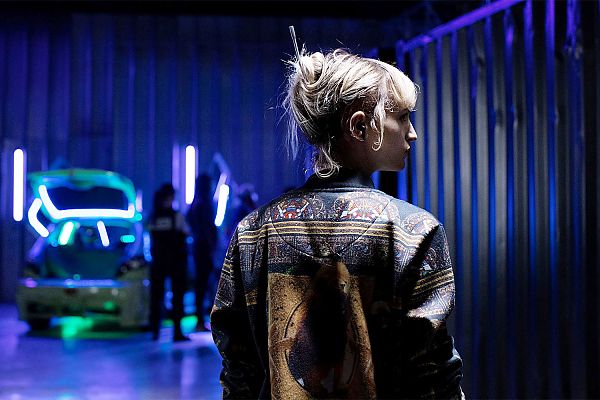 The comparison to David Cronenberg‘s CRASH is obvious. However, Cronenberg‘s film is cold and intellectual and TITANE is emotional and disturbing.

TITANE won this year‘s Palme d‘Or at this year‘s Cannes. It seems unlikely for a more exciting film to arrive in cinemas this year.

Julia Ducournau‘s (RAW) sophomore film revolves around Alexia (Agathe Rouselle), a dancer who makes appearances at car shows. After almost getting raped, she escapes her old life, drastically changes her appearance, and pretends to be the missing son of a fire brigade commander. “Father“ Vincent (V. Lindon) defends “Adrien‘s“ identity so furiously that Alexia changes her original plan of continuing to flee. Vincent, who tries to save his strong body from aging with steroids, sees something in the broken, androgynous creature, and Alexia feels seen in a way that is different from her old life where she was dancing suggestively next to sports cars. But being Adrien gets harder because her body is showing signs of pregnancy…

The titanium in the title is the implant in Alexia‘s head which repaired her skull after a car accident and represents one of the three elements that are present throughout the film. While the plot shows (gender) identity as unstable and fluid, metal, fire, and flesh interact with each other in a direct and physical way, always propelled by a powerful sexuality. The comparison to David Cronenberg‘s CRASH is obvious. However, Cronenberg‘s film is cold and intellectual and TITANE is emotional and constantly lets the audience and the characters feel, even when the feelings are confusing and disturbing. The first act is infused with explosive shock moments and a sensory overload, while the destructive energy afterwards is constantly simmering under the surface, and the question of when and how it will break out is truly thrilling. Since it is certain that it will break out. 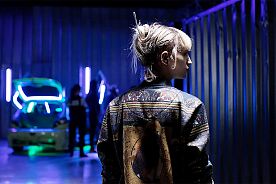 The comparison to David Cronenberg‘s CRASH is obvious. However, Cronenberg‘s film is cold and intellectual and TITANE is emotional and disturbing.