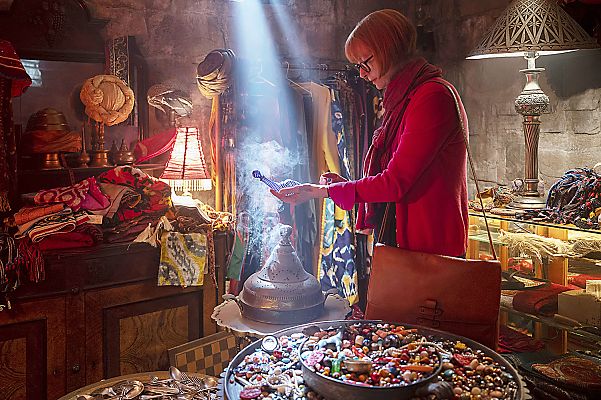 Literary scholar Alithea (Tilda Swinton) researches myths in pop culture. At a conference in Istanbul, she buys an antique bottle and the jinn (Idris Elba) inside it grants her three wishes. But first, the jinn tells her about his life.

As the director of the best action film of all time, MAD MAX: FURY ROAD, George Miller can do whatever he wants. Miller is 77 and has made a film about storytelling, even though the world is impatiently waiting for his next action banger FURIOSA. But that will only come out in 2024. First up is this project that‘s close to his heart, THREE THOUSAND YEARS OF LONGING.

When George Miller was young, Roland Barthes “Mythologies“ and Leslie Fiedler‘s essay “Cross the Border – Close the Gap“ were popular. They were narrative theorists who emphatically advocated for “post-modernism“ which would tear down the border between high brow and low brow. The Nouvelle Vague discovered the aesthetic qualities of American gangster films and Hitchcock thrillers. Miller‘s films were implementations of these ideas, neo-mythical stories focused on the simplest narrative structures like the MAD MAX films and fairy tales like THE WITCHES OF EASTWICK.

In THREE THOUSAND YEARS OF LONGING, based on a short story by A.S. Byatt, Tilda Swinton is literary scholar Alithea (lat. “aliter Thea:“ the other Goddess) who specializes in narratology, the research of narrative techniques. In a conference in Istanbul, she presents the idea of myths that have survived due to pop culture. Alithea has a hallucination and faints while in the background, you can see Marvel and DC superheroes. The next day, she buys an antique bottle in an Istanbul bazar and shortly thereafter a jinn (Idris Elba) slips out and grants her three wishes. But Alithea is familiar with stories about wishes and is careful. First she wants to hear the story of the jinn who has been bottled up for centuries.

The jinn is a story machine, a literary spirit who Alithea first speaks to in the language of Homer. His stories about seduction, power, violence, perversion, live and knowledge are about the power of storytelling itself. Miller stages these stories in sensuous and colorful contrast to the generic hotel room where Elba and Swinton negotiate while wearing white robes.

THREE THOUSAND YEARS OF LONGING is an almost academic film, perhaps even a kind of apology from an artist who has working in “trivial“ genres for all of his life: action, comedy, melodrama. The film is a declaration of love to storytelling. Maybe the stories are too symbolically overloaded, but they have to demonstrate the most important functions of storytelling, after all. Maybe the film could stand to be more suspenseful, but it‘s all very beautiful and charming to look at, Elba and Swinton are lovable as always and the Orientalist stories are nicely old-fashioned and colorfully designed. What would a literary scholar wish from a storytelling spirit? Something close to this. Which is great. It‘s a good date movie. 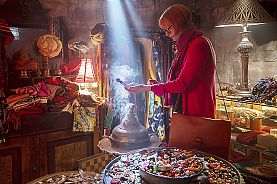 Literary scholar Alithea (Tilda Swinton) researches myths in pop culture. At a conference in Istanbul, she buys an antique bottle and the jinn (Idris Elba) inside it grants her three wishes. But first, the jinn tells her about his life.