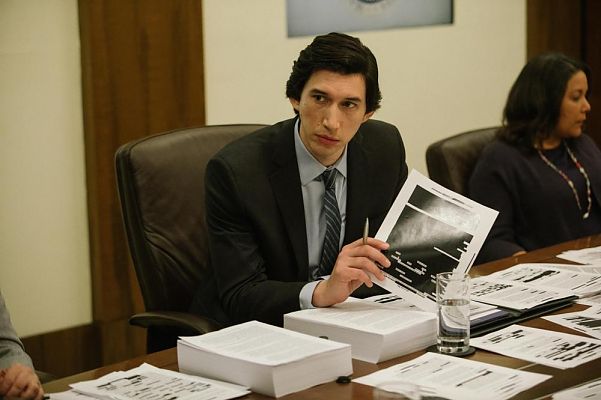 THE REPORT is a dramatization of how one man created the largest paper trail investigation in the history of the U.S. Senate — the 6,000-page Senate Intelligence Committee report on CIA torture.

When Daniel J. Jones is assigned by the U.S. Senate to investigate the CIA, the agency gives him a basement office to work in, but no office printer. “But paper is how we keep track of laws,” says Jones (Adam Driver) to a CIA official. The agent replies: “Paper gets people in trouble.”

THE REPORT is a dramatization of how one man created the largest paper trail investigation in the history of the U.S. Senate — the 6,000-page Senate Intelligence Committee report on CIA torture. That report, which the public can access today only in redacted form, sheds light on the CIA’s controversial interrogation and detention methods in the wake of September 11.

Written and directed by Scott Z. Burns, a frequent collaborator of Steven Soderbergh, THE REPORT is a political thriller of sorts, but only the kind of thriller that crosses its Ts and dots its Is. As Jones and his small team sift through nearly 6 million documents, emails, and CIA cables, the film’s ultimate chase scene is a chase for the truth. A story about procedure, the film recalls movies like SPOTLIGHT (2015), which have created compelling drama from people sequestered in meticulous research. Unlike the newspaper reporters of SPOTLIGHT however, Jones is not allowed to conduct interviews with key players. This shifts the human drama to conflicts between CIA operatives and Jones’ boss, California Senator Dianne Feinstein (Annette Bening) and to conflicts within the CIA itself.

This includes the agency’s old guard fighting the War on Terror — culturally-sensitive interrogators and compassionate doctors — against the new guard: two Air Force psychologists who have no experience with interrogation, yet are paid millions to perform brutal acts on suspected terrorists. The two psychologists claim their process is scientific, but are shown to be a Tweedledum and Tweedledee of torture, gathering worthless intelligence, which Jones exposes.

Thankfully, the film limits the torture scenes, which are depicted in a cold professionalism that reminds us of the banality of evil. This banality is also on display when various CIA bureaucrats react to Jones’ inquiry with indignation — demonstrating how if enough people tell themselves a convincing story, human rights abuses will be tolerated for a nation’s “security.”

In telling the other side of this story, THE REPORT provides a direct contrast to Hollywood films like ZERO DARK THIRTY (2012), which appears in the movie as a meta-reference, and which was criticized for implying the CIA’s torture techniques worked. That film received five nominations for an Academy Award. While it remains to be seen if THE REPORT will follow suit, at least on a critical level, it has made its mark as a cinematic corrective to this dark chapter in American history.